A Year of Change – June and July 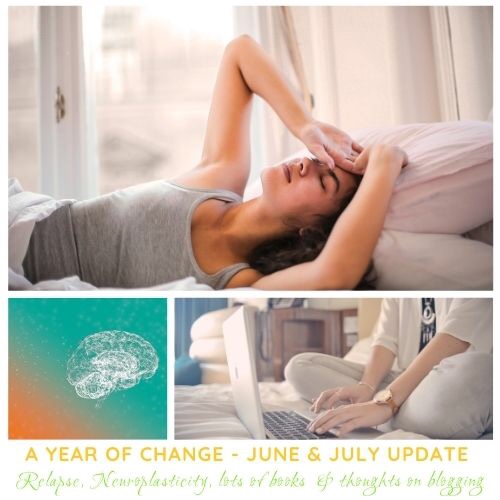 June and July have been a couple of really intense months, and I couldn’t write about one without the other. May had ended on a fairly high point, with my symptoms starting to reduce a little. We were also starting to edge closer to our move to the new bungalow (our forever home), and by the middle of June I was reflecting on how my bad days were becoming less frequent and easier to bounce back from. And then suddenly, out of nowhere, I was hit with the worst relapse imaginable. My vertigo was back with a vengeance, I had the most monstrous migraine that just wouldn’t let go, and I honestly began to lose all hope. I ended the month feeling at the lowest point, and it took me most of July to find my way back from the brink. But find my way back I did, and in doing so I discovered so much about myself.

Neuroplasticity and a focus on healing

I was going to write about Neuroplasticity in this post, but realised it deserved a whole post of its own, so please head on over here to read more about it. For the purposes of this update, I just wanted to share that learning about Neuroplasticity has really helped me to gain some hope that recovery is possible, after several weeks of feeling completely hopeless. I’ve been doing a lot of deep emotional work to uncover, explore, and begin to change the patterns that have impeded my recovery for so long. It’s amazing to me how much of a difference this has made, and even though I’m still struggling healthwise things are getting easier to cope with.

One of the things I realised through my work with Neuroplasticity is that I take on board a lot of the world’s stresses. It seems like no surprise to me now that my worst relapse came shortly after I had spent a couple of weeks completely consumed by learning about systemic racism. As much as the work was (and still is) necessary for me to do, I tried to do too much, pushing far beyond my limits, and ended up unable to do anything. That wasn’t conducive to me or those I was trying to learn from.

And as I realised my migraine phase was continuing well beyond its normal levels I considered the fact we were moving home (stressful), I’d had my PIP tribunal (stressful), we were still in the school holidays (stressful), and I was continuing to see things on my feed based on whatever the algorithms decided I should see (stressful). I couldn’t avoid the first three things, but I could protect myself a little by taking myself off social media and allowing myself complete control over what I read, saw, and heard each day. And as much as I miss the community, I do think it has been good for me.

The other big bit of news for June and July is that we finally started the move properly. As I write this update in August we have been in the house for over a week now and are starting to settle in to our new home. We’ve had so much help from my parents and a family friend, and I shall share more photos from the house soon. For now I just want to say how amazing it has been to have my own bedroom to rest in rather than having to switch rooms with Little Man when I couldn’t cope with being in the same room as someone else. This perhaps more than anything else has reduced my stress levels considerably. I’ve yet to manage a night in the same room as Tim, but am hopeful that this will come in time as I continue to honour my body’s needs rather than feeling guilt and shame over how long it has been since I was able to do this.

Once Little Man is back at school this room will also double as my craft room, and I cannot wait to get back into writing and creating things now that I have easy access to all my materials for the first time in a couple of years.

Another thing that happened during these two months was that I completed the Platform Building Bootcamp with Kara-Kae James, and am now in a lovely mastermind group with some of the ladies who were in the bootcamp with me. They have helped me to understand the value of my voice as it is, someone who is chronically ill but healing with faith that recovery is indeed possible.

I’ve long felt like a bit of a fraud when it comes to blogging and social media, as I’ve been doing it for so very long and yet never really built up my platform very well. But I’ve come to realise that I’ve been approaching what I do online with the perfectionist ideals that are so destructive to my well-being. I’ve felt like everything had to have a certain value, rather than simply being something I care about. And yet my best performing posts are always the ones when I am most open and vulnerable and when I polled my audience on Instagram there was far more interest in things like updates from our home and garden than there were in the things I thought I needed to do like Bible Studies or sharing resources.

So moving forward I want to share more about the random day to day things that bring me joy and have an impact in my healing journey. There will be lots of garden updates as I get to grips with it. There will be plenty of craft updates, including progress reports rather than always having to wait for the finished article before posting. And thoughts about my writing as I work on my novel.

Rediscovering the joy of books

Finally there may also be some book reviews. I’ve been really enjoying listening to a range of books lately and I’d love to share some of my favourite finds with you.

There’s the Geekerella series (which I love but want to wait until I’ve read the latest which was only just released before writing about). It completely fills my geeky little heart to read stories set around the sci-fi and fantasy world I fell in love with as a teenager. I’ve never been to a convention, but reading it makes me want to if I’m ever well enough to do so. I’ve long hidden my geeky side, but reading the books makes me also want to share some of my favourite TV shows and fan fictions with you – who’s up for that?

Then there is Sorcery of Thorns, which I absolutely adored and have to share with you. I mean, it’s a world where books are alive and full of character but also potentially deadly. And sorcerers get their power by making deals with demons, and yet one of those demons is the most captivating characters of the entire story. What’s not to love about that?

And I am finally dipping my toes into the world of Brandon Sanderson by listening to Elantris. Tim has wanted me to read this for several years and I can see why. It’s a long book, with a lot going on, and I do sometimes get lost, but the storytelling is magnificent.

Anyway, I shall write more about these when I feel up to it. Or I might even do a video review, who knows! What I do know is that I feel excited about blogging again for the first time in a very long time. And that comes down to letting go of the idea it needs to be perfect and embracing the idea of it simply being a place to share what I love.

So that’s all from me. How have you been?

A Year of Change – January

Calling UK Christians - We Need To Do Better!

My favourite resources for the worst days