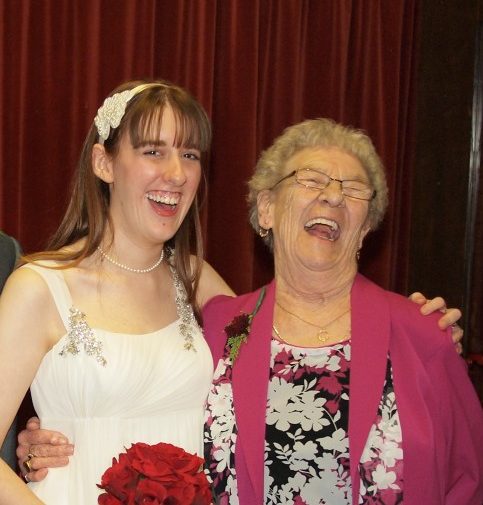 Yesterday evening my Nan passed away, after months of being very poorly. We didn’t expect her to make Christmas, so it has been a very long journey.
I’ve spent several weeks thinking about how cruel the end of life can be, as your body slowly and painfully shuts down. So when my mum called to tell me she had finally passed last night, my reaction was one of relief, not grief.
I went downstairs so I could spend a few minutes alone thinking of her, telling her how I loved her and would miss her, but that I was glad she had finally moved out of the pain and would be reunited with her husband and sister. Immediately I was overwhelmed by a sense of absolute joy, and I just knew it was from her – she faced her biggest fear (death) and is now at peace.

With my Nan and my uncle on our wedding day.

I had been feeling guilty that I hadn’t been able to visit her since November. I’ve been so sick that it just wasn’t possible, but even knowing that I still worried that I would regret not getting to see her one last time.
But last night I knew that it didn’t matter. She is finally home and at peace. And as my mum said, it’s better to remember her as she was, rather than the battle she faced at the end.
So today I am remembering the feisty woman that my Nan was. Highly opinionated, and often sharp with her words, but fiercely protective of those she loved. She knew her own mind and wasn’t afraid to voice it, and you couldn’t tell her anything if she didn’t want to hear it! I guess we know where my stubborn streak comes from…
More than anything, that’s what I’ll remember about my Nan. She wasn’t the stereotypical, cuddly grandmother whose house you ran to when your parents were driving you up the wall. She certainly wasn’t the first person I thought of when I had a problem that I needed to share. But she was a strong woman, who survived many challenging times and experiences through her life, with the grit and determination that she held onto right to the bitter end.

I have no doubt this laughter was caused by something rude or rather inappropriate!

She walked on the edge sometimes, and more often than not the things she said were the least politically correct you could get! I think there have been times when we’ve all looked at each other with an expression of, “did she really just say that?” in our eyes, which makes me chuckle now.

But more than that, I’ll remember the cheeky side to her, the times when she laughed so hard she cried. Like the time my cousins told her that sex education these days involved putting a condom on a carrot, and she hadn’t quite believed them so asked me and my sister if it was true. Oh my word, I don’t think I’ve ever seen anyone laugh as hard as she did that day!

That is the Nan I’ll remember. The lady who was stubborn as hell, and lived life the way she wanted to. She would have been 87 tomorrow, and though I am sad to know that we’ll never see her (in this life) again, I am glad for all these memories.

Goodbye, Nan… I love you.

Road Safety: How do you keep your kids safe?

How To Teach Children To Be Kind

Exploring Emotions With Kids – Playing The “I Am” Game