How And Why I Decided To Go Freelance 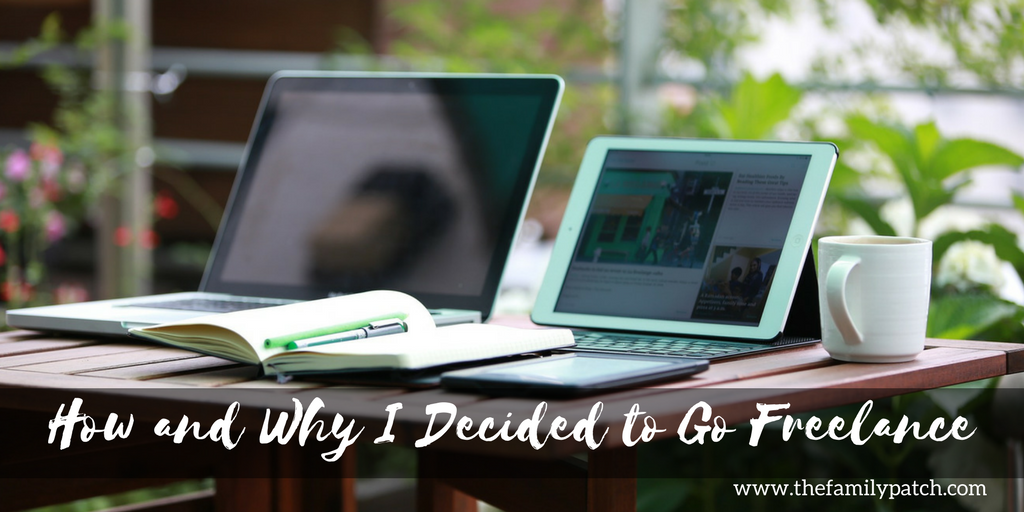 I’m going to begin this post with a little disclaimer; I have been registered as self-employed since Spring 2010 and have, during the years since, done the odd bit of freelance work here and there. I’ll be even more honest with you, when I first registered as self-employed in 2010 I had every desire to go 100% freelance as soon as possible. However, back then I was far more naive about what it would take to succeed as a freelancer, and I had all but given up on the idea of earning more than an extra bit on the side by the time 2011 rolled around.

So when my sister-in-law approached me about redesigning her company’s website last year, I must admit I was slightly dubious about the idea of turning my side hustle into an actual business. After all, when your self-employed earnings are simply an added bonus on the side, it doesn’t really matter if it succeeds or not, you’ve still got your employed earnings to fall back on. And, being the “responsible” adult I always try to be, it seemed rather too risky to put all my eggs into one basket and simply go for it when I actually had a job which paid the rent and which I utlimately enjoyed.

However, following my sister-in-law’s advice and encouragement, I set up Shortman Media as a way of bringing all my online media and communications experience under one roof. It meant that I could invoice her for the work I did more professionally, and I had the basis from which to expand my services as and when I wanted to. At that point the idea was still to run the business as a side hustle, rather than my main income provider, taking on work as and when I had the time. But it seems that life had different plans for me after all…

What followed were several months of increasingly challenging health issues. At my worst, I could barely get out of bed, and I spent the vast majority of 2016 being tested for one thing after another. I was signed off work in July 2016 and never made it back, because my symptoms were simply too complicated and erratic to enable even a phased return to work. And throughout it all I began to see everything slip away – my health, my financial freedom, and my ability to do work which gave me a sense of both satisfaction and accomplishment.

Which brought me to the very end of last year, when I gained a certain amount of clarity regarding my future. Instead of seeing freelance work as the riskier option, I needed to look at it as the more flexible option, which would enable me to return to work far sooner. You see, the work I do is mostly based on the computer – I can do that in my office on good days or from my sick bed on bad days. Being freelance also means I can work at 7 o’clock in the evening if that is when I feel at my best, rather than being tied down to standard office hours.

And let’s not forget that freelance work pays me at least double, if not more than the hourly wage I had been bringing in through employed roles. Even taking on board the need to save up for NICs, tax, quiet periods with little work, and unpaid holidays, this difference in pay means I wouldn’t have to work as many hours to still make ends meet. That’s got to be a bonus for anybody, but especially somebody who is chronically ill.

Now I don’t want to paint a perfect picture here – the decision to go 100% freelance was not an easy one. I am well aware that most businesses fail within the first 5 years (often sooner), and that there is a huge risk in trying to start up at the best of times. I’m under no illusions that this is going to be easy and I’m not going to worry about where the work is going to come from.

But the fact remains that going freelance is still my best option right now – the alternative would be relying on my employer to keep my position open beyond the 6 months they already have (which I am incredibly grateful for!) and hoping to qualify for ESA as my SSP entitlement runs out. Out of those two options, I’d much prefer to take things into my own hands and try to make this freelance thing work, wouldn’t you?

So, it was with a heavy heart that I approached my employer about ending my contract due to ill health and made the leap of going 100% freelance last month. I shall remain connected with my employer on a voluntary basis, because I really did love the work itself, but the time had come when it was in all our best interests for me to leave. And as shocking as it may sound, I am actually starting my freelance journey with not one but three clients on my books.

If you’d told me this is how I would start 2017 I wouldn’t have believed you. But the truth is that when you put your mind to it you can make this happen, even when you’re feeling beaten to the core (I have spent the vast majority of December and January very sick and yet I’ve still managed to get this sorted). All it takes is courage to face the unknown, reach out for support, do your research, and then just go for it.

But what’s different now to where I was in 2010 when I first tried to go freelance? Why did it fail to kick off then but is doing so well now? Well, age and experience have a lot to do with it.

In 2010 I’d been blogging for 4 years, but blogging was still relatively unknown and social media still hadn’t taken off in the way it has done in recent years, so the idea of making money from online media as an unqualified (but experienced) blogger just didn’t seem doable to me back then. In the almost 7 years since, I have developed this blog, launched a second one, assisted employers with their social media, taken part in charity campaigns, co-authored a book, attended multiple conferences, spoken at a blogging conference, and become active in blogging groups. All of that combined is a huge amount of experience that I simply didn’t have in 2010.

I’ve also had the wonderful experience of being supported through one-to-one coaching sessions both personally with Pippa at Story of Mum and professionally with Michelle of Michelle Reeves Coaching. Between the sessions with these two wonderfully inspiring women, I came to realise the potential of what I had to offer and that I can do this, even when I am struggling healthwise. In fact, my health issues even make me more aware of my strengths and abilities, because I have had to learn to adapt and grow at every stage.

I’ve learnt about the importance of developing multiple income streams, so that the work I do with clients via Shortman Media isn’t my only source of income. Those quiet moments between clients need some kind of passive or alternative income stream, and so working on both this blog and Spirit Kid Network enables me to focus on ways to boost my income when needed. But because I have chosen to work with clients as my main income, I feel less stressed about making my blogs as profitable as possible, which is something that I know would cause me more stress than necessary.

And that’s the biggest lesson I have learned throughout my freelance journey so far – you have to do what you love, otherwise you simply won’t get up and do it. Because let’s be fair – it’s hard enough to motivate yourself to go to work when you’re being paid a salary, so forcing yourself to do something you really dislike to secure that next contract, really isn’t going to work, is it?

So that’s where I’m at – after years of being self-employed with the odd bit of work on the side, I have finally taken the biggest leap of my life and decided to go 100% freelance. I know it won’t be easy at times, and I know that what I do will change over time (already my services on my website don’t truly reflect the work I’ve ended up doing), but I have confidence that this time it really will work. Because it has to. And, because I know I have the support I need to make it work this time.

I’m going to be updating my freelance journey on here, if there is interest in hearing about it, so please do leave me a comment below and let me know what you think. I’d also love to hear from you if you do any freelance work – how did you choose to go down that path, and is it what you expected?

When Blogging isn’t an Option…

Gifts from the Goddess