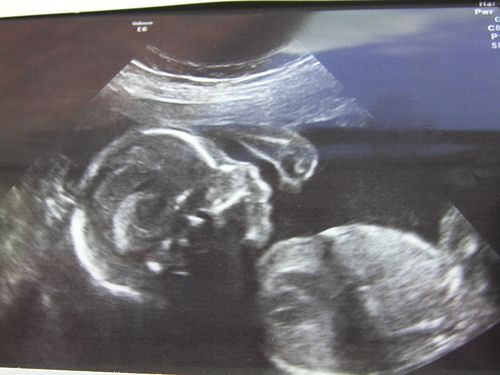 Our scan last Wednesday went really well, although the “little monkey” (as our sonographer named him) was in one of the most awkward positions for getting the measurements and checks needed, despite all our best efforts to persuade him to move. It was almost like our 12 week scan again… he just relaxes happily away in whatever position he likes, no matter how much wriggling, jiggling and coaxing we try.

Funnily enough, the position he was in made it perfectly clear to the sonographer straight away what sex he was. The problem came with trying to get a good view of those so important areas such as his heart! But, after a lot of twisting and turning on my behalf, we finally received the most precious words… “everything looks fine”.

Which left only the photos to be taken.

Our sonographer said she’d try her hardest to get some decent photos for us, but with the position he was in we might have to turn the photos upside down to get a good look at him… and then, lo and behold, as she said this, he decided to turn and lay in the perfect position for the photos to be taken. I think we’re going to have one stubborn, but camera-loving child at this rate!

So there it is… we’re expecting a son in September and couldn’t be more excited. There were a few moments of sadness at the fact that as we plan on only doing this once, we will never get this experience again and will never have the “possibility” of having a girl as well, but those moments have passed. We’d have felt exactly the same way were we expecting a girl and realising we might never have a boy. It’s just a strange thing to think that we’ll never do little girly things.

*Finally* got my hair cut again, for the first tim

I'm going to start writing my Christmas cards this

I reorganised my room yesterday. All the craft stu

We had to go to town today for a dentist appointme

Yesterday Thea and I travelled almost an hour away

My wheelchair arrived! 😃 We need to charge the

TW: Blood Can we talk about the hell that seems t

Finally home after 9 hours in A&E... an ECG, chest