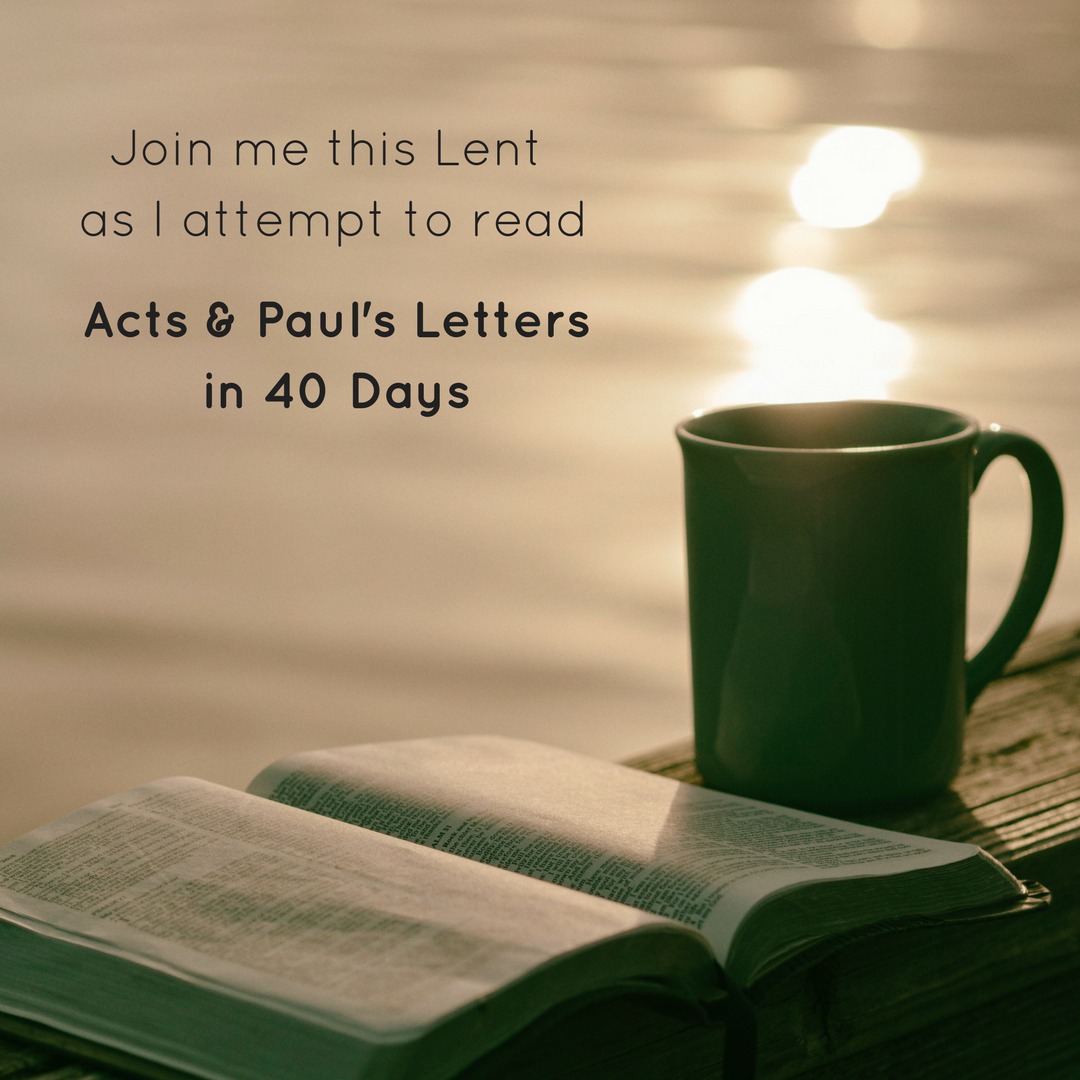 Disclaimer: the two links to books in this post are affiliate links. If you click on the link and then purchase them from Amazon, I will receive a small incentive for this, as per my disclosure policy.

Can you believe that Lent is already upon us? I feel as if the year has only just begun and suddenly we’re preparing for Easter. Admittedly this is probably because I’ve spent most of this year housebound due to a massive flare up of health issues – I haven’t managed to make a church service since New Year’s Eve! Which is probably why I decided that instead of giving something up for Lent this year, I’d focus on digging deep into my faith with some daily bible study. And, after some careful consideration, I’ve decided on my Lent Reading Challenge – Acts and Paul’s Letters in 40 Days.

Why Acts and Paul’s Letters?

I’m pretty new to Bible Study, having only really dipped in and out of the Bible until quite recently. There are whole books that I haven’t read, especially in the Old Testament. But one thing I have noticed is that whilst I haven’t read all of Paul’s letters, the verses that I often turn to for encouragement and support come from one of them. And so I want to read them in full.

I want to learn more about the Early Church, and where better to do that than in Paul’s Letters, which are some of the earliest parts of the New Testament to be written. So often we begin with the Four Gospels, don’t we? And yet most of Paul’s Letters predate them. I want to explore the letters that Paul wrote to the various fledgling congregations, bringing the Good News of Christ to non-Jews, whilst remaining rooted in his own Jewish background. In fact, the more I learn about Paul himself, the more intrigued I become…

Last year I bought a book called, “Paul, The Jewish Theologian: A Pharisee among Christians, Jews, and Gentiles“. You know how sometimes you see a book and just know that you need to read it? This was one of those books for me. I have only just picked it up and started reading it, but already I am loving it.

As the author so clearly explains in the introduction, Paul is a fascinating character because he continued to consider himself to be a Pharisee throughout his life, despite being, “rejected by the synagogue and misunderstood by the church”.

The author continues to say that, “sometimes, as Christians, we have accepted Paul’s teachings about Jesus while rejecting his love of the Hebrew Bible, as well as his Judaic heritage.” And this is something I am keen to avoid, by reading the book as I work my way through Acts and Paul’s Letters.

reading the bible in its historical and cultural context

One of the things that I have been learning about over the past couple of years is the importance of Religious Literacy, that is reading Sacred Texts through a historical and cultural lens. The books of the Bible were all written in very specific historical and cultural contexts, and whilst they contain eternal truths, we must always remember that the way in which these truths are expressed and explained are connected to the time of their writing.

For me, this understanding was entirely influential in my decision to explore Christianity further and eventually decide to be baptised last year. Being able to explore how and why the texts came to be, deepened my connection to them. I began to understand what they were saying far easier than when I had little to no context for them. And in turn I started to grasp how they could be as relevant for me today as they were to the original readers.

Paul – a theologian in a changing world

This is why I think I feel so drawn to Paul’s Letters. His entire story fascinates me, from his dramatic conversion on the road to Damascus through to his letters of encouragement and explanation to those who were also trying to accept a whole new way of living.

He understood perfectly what it was like to have a whole change of heart that was so powerful it changed everything. He knew what it was like to feel inspired to change the way you lived, when doing so was downright scary. Let’s remember, he lived in a time of severe persecution – indeed, he had once been the persecutor, so he knew the risks!

A message as powerful today as it was back then

How much does that sound like life today, in many ways? How many people throughout the world live in fear because of their faith? How many people, even in places where freedom of religion exists, still face discrimination or ridicule for their beliefs? How is it, that 2,000 years have gone by and we’re still facing the same challenges?

We see churches trying to connect with new generations of people in an increasingly secular society. We see people abandoning religion, because it has felt too rigid, and turning instead to New Age Spirituality (which is, as it says on the tin, a new way of exploring faith). And we see more and more interfaith dialogue beginning to take place. For all the times in which we are told, “God is dead” or “Churches are dying”, I see just as many examples of people doing exactly what Paul did – trying to figure out how to live their faith in a new way.

interfaith dialogue – as old as the hills

And that’s something that excites me, as I find myself balancing my faith in the eternal Christ alongside other lesser known expressions of faith. And the more I do that, the more I find other people doing it too. No longer do I feel as if my exploration of Christianity needs to be at odds with my exploration of the Divine Feminine or Pagan Sabbats. None of these have to be exclusive of the others, Paul taught us that in so many ways:

“After all, Paul is a Pharisee living among the Christians, Jews, and pagan Gentiles. He is a bridge builder. He confronts hostilities from many factions in the church as well as from the Greco-Roman world in which he ministers. As a Jewish theologian, he labors diligently to win acceptance for non-Jews among all Christian believers.” – Brad H. Young (Paul, The Jewish Theologian).

i want to be a bridge builder

Isn’t that a wonderful way of describing Paul? He’s a bridge builder. And we need more of those in our world, don’t we? There is so much strife all around us, and sometimes it feels like everyone is out for an argument. But as much as I love a good debate (and I do), I do not want to argue. I want to help build bridges, and how better to begin than by reading the words of one of the greatest bridge builders?

Do you want to be a bridge builder too? Why not join me in my Lent Reading Challenge and work through Acts (starting with Paul’s conversion) and Paul’s Letters in their chronological order? I’ve devised a 40 Day Reading Plan, using my Daily Bible, and I’d love to hear how you get on with it if you decide to try it too.

If you do decide to join in with this reading challenge, please do let me know! I’ll be sharing my thoughts over on instagram and Facebook as I work through it. And if you’re on Pinterest, why not pin the image below so you can come back to the reading plan any time you like…

Keeping Faith… Why I believe…

The Power of Women