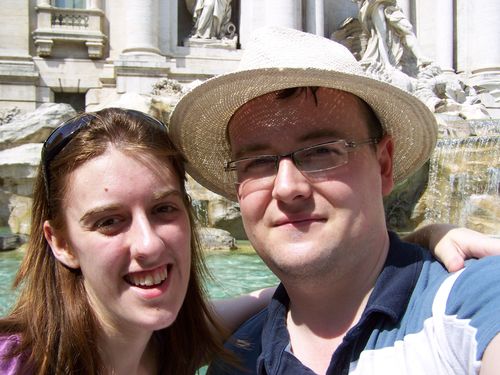 First of all, can I say a very warm welcome to any visitors who have popped by from iVillage and my new series there…

It’s lovely to see you here!

Now, for my regular readers in particular, I thought it might be helpful to write a post following on from yesterday’s to explain how Tim and I have suddenly come to the decision to try for a baby after the wedding. After all, it wasn’t all that long ago that I felt my health was too bad to even think about it (which I don’t think I mentioned in so many words on here but several of my readers knew of such from “off-the-blog” conversations).

The very thought of not having a baby breaks my heart because I have been surrounded by children since my mum first became a childminder when I was 9 years old and as such I have known for most of my life that I wanted a family of my very own when I grew up. My interest in children continued as I worked in a couple of daycare settings after graduating from University and I began reading the blogs of other families and seeing my friends starting their own families too. This interest even leaked into my artistic explorations, as the above image shows and the painting in the previous post also indicates. Essentially I was dreaming of the day that I would be able to say hello to my own child.

When I met Tim I was overjoyed: he is such an amazing person and we have spent many happy times together, despite all that has been against us these past two years. He knows how much I want a baby and accepts it. In fact, he understands it and when my Endometriosis symptoms began to really get the better of me and I started saying “maybe we shouldn’t try for a baby” it broke his heart to hear me say it. In his eyes, having a baby is the next step in our journey together and he wants it as much as I do now.

Of course, he always followed my lead and made it clear that if I didn’t feel well enough to try to conceive and then carry a baby to term then we wouldn’t try. He essentially told me to tell him when I was ready and that would be when we began trying. Which is where we find ourselves at right now.

You might not think it’s that difficult to know “when you are ready”, but it is for me: much harder than I ever thought possible. As I had always known I wanted a family, I thought that it would be easy… I’ve wanted it for years so to find myself in a position where it was possible should make me ‘over-the-moon’, right? Unfortunately not. Over the past two years I have been through two pseudo-menopauses and had a laparoscopy to clear the adhesions the Endometriosis had caused between my internal organs. As such, my energy levels became desperately depleted to the point where I just had to leave my full-time job or else I might have broken down completely with the stress of it all. I felt ready to be a parent emotionally last year, but physically I knew my body wasn’t up to the job, so I decided to wait.

I expected the medical interventions to help, and although they did, my symptoms have not disappeared completely. Unlike after my first laparoscopy and initial fitting of a Mirena Coil when I had a good 2 years symptom-free, I have continued to have regular cramping and even some bleeding since my last laparoscopy in May 2009. I thought coming out of full-time work would help with my energy levels, but thanks to moving home, setting up a business and planning a wedding I have not improved my energy levels as much as I had hoped. These things made me wonder if it was prudent to start trying for a baby right now, let alone the worries we have about finances with just one income coming in to the household.

But last week we had our niece to stay, and taking her to the local play park pulled on my heart-strings enough to make me rethink the whole thing: how could I look at all those happy parents with their children and not feel the pull? My health is better than it has been in a long time, despite the fact I still get tired easily, and I have no guarantees that the Endometriosis won’t cause me more problems if we leave it any longer before beginning to try. I have already had two surgeries, which are bound to leave some scar tissue however minimal, and the older I get the harder it could be to fall pregnant anyway. With all these things running through my head it makes sense to try as soon as possible, rather than waiting for an energy level I may never reach. When I think about it I realise that I have lived with Endometriosis and its effects for years now and managed to graduate and hold down demanding jobs throughout some of my hardest times: if I can do that then I can surely attempt to have a baby. I know it will be hard, but I also know I can cope with ‘hard’!

It has been a year since Tim proposed to me and we marry on October 15th, three years after we first got together and 3 and a half years since we first met. It has been a crazy jouney so far, so why not enjoy some more crazy while we’re at it?

We have a follow-up appointment with the gynaecologist at the end of the month and plan on having my Mirena Coil taken out shortly after the wedding. According to the Mirena FAQs you can start trying to fall pregnant straight away after having it removed, but we are preparing ourselves to know that it could take some time as I haven’t had a proper period in 5 years now and my cycle never was very regular. Until then, however, we are making preparations: optimising our diets, starting more exercise (i.e. yoga), reading as many books and articles as we can and discussing it all with each other. It is a terrifying, yet exciting time.

But we know we can survive it, because we have each other. And I know I will survive it because I have learnt to accept living with Endometriosis, even when I don’t like it. It is my hope that being completely open and honest about what we are going through will help others, which is why I initially approached the editors at iVillage about running such a series. As I wrote in my first article over there, I know that the road may be rough and I could potentially end up writing about an inability to fall pregnant or the pain of miscarriage, but I felt it too good an opportunity to miss in spreading support and awareness for Endometriosis… if I kept it all to myself for fear of what I might face then I would know that I wasn’t doing all I could to support others.

So, please do pop over to the iVillage Pregnancy and Baby Channel to follow my series, and if you are trying to conceive yourself, why not join the forum over there and get to know other women who will understand what you may be going through.