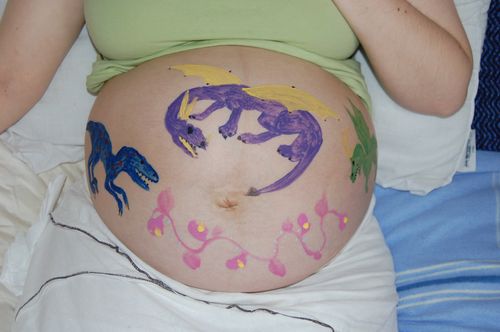 Warning: this post contains several pregnancy photos, so if you find those difficult to look at, please do come back tomorrow when a new post will be showing at the top of the screen!

Yesterday was a very strange day here at the Patch. Despite being very excited for the photoshoot I had planned with my “official photographer” Dawn, the day started off with first a sleepless night thanks to nightmares and then a phonecall with some very shocking and sad news. I’m not going to go into details right now as it doesn’t feel right at the present moment, but with the entire family trying to get their heads round what had happened, it felt strange to be carrying on as normal, almost like time should have stopped for a while.

Have you ever felt excited about one thing and sad at another at exactly the same time? It’s a strange mixture of emotions and for a few moments I wondered whether perhaps I should cancel the shoot and reschedule it for another day. But I’m glad I didn’t, because it brought my focus back to the joy in our lives right now. And it was a lot of fun.

Dawn and I have been discussing a new series for the Patch based around photography and one of the thoughts we had was to take photos of certain topics that Dawn could then write about, giving hints and tips to people who want to have a go at it themselves. Obviously, the first photo shoot we planned was a maternity one and I cannot wait to share Dawn’s tips with you once she has had chance to write that article, because I’m sure there are many ladies like me who want to capture this special time in their lives but do not want to or have the funds to have a professional shoot.

You may remember that we didn’t have a professional photographer on our wedding day, but chose to let 3 of our friends take as many photos as they felt like. Dawn was one of those three and has recently been dubbed “my official photographer” as she knows just how to grab those shots that show our personalities so well. I like to think it’s because she’s a quirky as we are, or we’re as quirky as she is, and so we don’t really need to plan photos as such, just take a lot of shots as we enjoy ourselves.

Which is how the following photos came out. I’m going to share a small selection, however as is usual when working with someone like Dawn, there are far too many good shots to include in one post. So I’m planning on setting up some photo galleries here on the blog so that you can see the work that Dawn has done and I can link back to them when her articles go live.

But for now, here are some of my favourites from the day!

Tim started off by being artistic and painting flowers on my bump (can I just say I always forget just how big my bump is as I never see it from this kind of angle!)

But he then went slightly mad and we ended up with this piece of art, which Tim quickly named “Storm in a Lawnmower”.

So we wiped it off and let Dawn get to it. Dawn is an awesome painter of dragons (I have several dragon birthday cards and a glorious painting she made us for our wedding which I really must share with you sometime). Having her paint them on my bump was funny, and little man did a whole lot of wriggling, so we’re guessing he likes dragons and dinosaurs as much as she does!

I then decided to get changed so that we could take some more “serious” shots. I don’t really do serious, but I did know I wanted to catch a few more intimate shots to keep. We had fun playing with light and shadow…

And we even took a few outside. However, being as overcast as it was and having washing on the line, we kept the outdoor shots to a minimum. Well, the outdoor shots of me anyway: Dawn had a lot of fun taking photos of our flowers and veggies, but who can blame her? I’ll share some of those photos later in the week.

It didn’t take long before Tim was up to his old tricks however. I’m not sure that I ever did share his impression of “Psycho” from the photos of us cutting the wedding cake. But if you’ve been following this blog for any length of time I’m sure you’ve seen many photos with Tim messing around in them. I’m not sure messing around with my top while I was cutting the vegetables for dinner was the best idea, you know pregnant lady with a sharp knife and all that! But what can I say? The boy makes me laugh, daily.

Case in point. What started as a “couple” shot, ended up with Tim playing a vampire.

I may sometimes “look” irritated momentarily…

But I quickly get my own back!

And Tim is always up for a laugh, even if it does mean looking a bit ridiculous!

Of course we had to take a photo to prove that yes I have actually overtaken Tim on the belly front and that compared to my bump, he looks rather svelte indeed! Have I mentioned how practically all of the weight I have gained has gone directly onto my bump? I am one solid lump out front, but still relatively small everywhere else. And I haven’t a stretchmark in sight, much to the annoyance of my friend. I thank my mum for her excellent genes when it comes to the skin… thanks mum!

Finally, we couldn’t forget to get a shot of daddy talking to his son. Tim finds real joy in shouting into my bump and then laying his head against it to see if he can get a reply. Just the other day I was concerned that little man hadn’t moved much at all (he is usually on the go all day long) and Tim’s response was to blow a massive raspberry on my belly. I think the resulting kick he got in the face was just priceless. Who says daddy and son can’t have fun even before birth?

I hope you’ve enjoyed seeing some of these photos. As I say, my plan is to get a section on the site for photo galleries so I can upload these and other photos into categories that are easy to search and look through. So keep your eyes peeled for that new addition.

And come back tomorrow to meet yet another guest blogger. I feel so honoured that so many people have taken up my offer to host guest posts here at the Patch and hope that several more of you might consider it in the future too.

Why I write (and a tribute to my cousin).