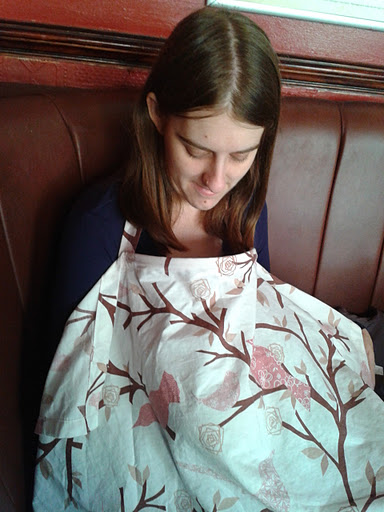 I have been meaning to write a review of the fantastic nursing cover I bought several weeks ago, but just haven’t found the time. And now that my breastfeeding days are numbered I thought I better get it done!

If time were not so limited for me right now I would of course have dedicated an entire post to the review and a separate one to my decision to switch to formula feeding. But with Little Man to occupy most of my time, and Christmas preparations taking up what is left, I’m afraid you will have to do with a combined post. I’m sure you’ll forgive me.

So, first, let’s do the review:

Any breastfeeding mother will surely know how difficult it is to nurse her baby out in public without a handy cover to protect her modesty. Some may even have heard about nursing covers. I know I had heard of them a long time before I even fell pregnant. But for some reason I had this crazy idea in my head that a simple blanket or muslin cloth would suffice… how wrong I was!

If you have ever tried to feed a fussy, squirming baby whilst trying to keep a blanket over your boob that is flashed to the entire world every time baby moves, you’ll know what I mean. Even with TJ’s help to hold the blanket steady, we still managed to give several customers in the local coffee shop more than they had bargained for.

So, when my friend showed me hers and reminded me that they existed, I decided to go ahead and buy one.

You can buy these in lots of places. My friend got her from Mothercare. However I decided that I wanted to have a pretty handmade one to make it feel extra special and to support the work of people like me who are just trying to make a little extra cash from selling items they have made with love and care. I did the same when buying my changing bag, another item I must write a review about when I get the chance.

I was expecting to pay a little more than my friend had for a handmade item, but actually found several that were almost half the price of the mass produced one. So there’s a lesson for anyone who believes handmade has to mean more expensive!

I looked around at various options and eventually chose this one because I fell in love with the bird and branches print. As you know, I am a huge fan of trees and as the changing bag I have yet to show you also contains a bird print (you’ll have to take my word on that for the time being) I decided this was the perfect cover for me.

But it was not only pretty. Oh no, the person who made it was thoughtful enough to include a little pouch in one corner, which can be used to store a dummy in and/or wipe the milk that babies sometimes manage to dribble all over themselves. Now isn’t that a great little addition?

I hope you can tell just how much I love this cover. I am not yet sure what to do with it once I finish breastfeeding Little Man. I might try and make it into a little bag to store things in his nursery (another thing I have to show you). I have fond memories of using it out and about and don’t want to just discard it or pass it on when we finish needing it. That is how much I love this cover. I hope that shows how great it is.

As you can see, the cover is fantastic at making sure you are perfectly covered no matter what position your baby manages to get himself or herself into. It just slips over you head, you swivel it around until it covers the part you need it to, and then you adjust the neck part so that the hoop part at the front lies in a way that allows you to see the baby while you nurse without anyone else seeing.

Not only is this practical, but it also helps make nursing in public much more intimate between you and your baby, as your baby is sheltered in his or her own little world that you can look into and see. How wonderful is that?

So, if you want to buy yourself a beautiful handmade nursing cover just like this one, from an extremely friendly etsy seller, then visit Watershed Creations.

And now on to my decision to give up breastfeeding…

When I decided I wanted to breastfeed Little Man, I told myself that if it didn’t work out for us I wouldn’t worry as I believe in a woman’s choice and that a happy, healthy baby has a happy, healthy mother.

Well, for the first few weeks breastfeeding went wonderfully. It was challenging, of course, but I enjoyed pretty much every minute of being able to feed my baby in that way.

But when Little Man was 6 weeks old I started developing blocked ducts. These developed roughly every couple of days and although they would generally clear up within a few hours (thanks to some rather painful nursing and hand expressing for those several hours pretty much non-stop) they were mightily painful.

I called my health visitor. I went to a breastfeeding group. I used the #bfcafe hashtag on twitter to find out what I could do. And initially it seemed we were getting somewhere.

I discovered that I was having issues with oversupply, that is that my body was making too much milk. Reading the list of symptoms it explained so much of my problems and Little Man’s feeding habits such as chomping down on the nipple, gagging and coming off the breast at the beginning of feeds, fussing and wanting to feed every half hour (to name just a few). So I started trying things such as block feeding and putting Little Man into a 3 hourly routine rather than letting him feed on demand. And it did feel like things were getting better as I only had two blocked ducts in a fortnight.

Then things got worse again. I got a terrible blocked duct that would not clear for about 12 hours. I don’t think it fully cleared anyway because I was in agony every time I fed that week. It brought me to tears, I dreaded feeding him, I bit my lip the whole time he was feeding, and that wasn’t all… I also had throbbing pain whenever he wasn’t feeding.

This led to more blocked ducts (or the same one, I don’t know) which didn’t clear for 2 days. Not only was I in agony but Little Man was screaming because every time I put him to the breast to try to clear the duct he was sucking for dear life but nothing was coming out… and he was hungry!!

One night in the midst of this last episode I decided enough was enough. Not only was I in pain, but Little Man was suffering too. I was having to give him formula anyway when I had blocked ducts that wouldn’t clear during his feed and seeing as they were happening so regularly we were on our way to mixed feeding as it was.

And even worse than that was the fact that our relationship was being battered too. I no longer enjoyed feeding him, but felt like screaming whenever he latched on. I was cross that he took so long to feed when every suck felt like razor blades on my nipple. I wasn’t sleeping because of the pain from the blocked ducts. I was crying for hours on end from the pain and frustration of it all. And Little Man wasn’t getting the best of me. Nor was TJ.

That was when I realised that I didn’t want to remember these early days with him in this way. So I decided to switch to formula feeding. I am sad that breastfeeding hasn’t worked out the way I hoped. I resent the fact that yet again my body isn’t working as it was meant to. But I do NOT feel guilty. And I never will, because I know I am doing this for Little Man as much as I am doing it for me. He needs a happy, strong and healthy mama to love him, not one who puts the pressure to breastfeed above the desire to be the best person she can be for him.

I feel lucky that I was able to breastfeed at all. Some women never get that chance. Yes, I had wanted to continue breastfeeding until he was weaned, but because I have to slowly switch over to formula by dropping just one feed every 3-5 days to avoid too many blocked ducts and mastitis, he will be over 3 months by the time he is on formula full time. And that is an achievement I am proud of.

I know I have done everything possible to continue as long as I could. I didn’t give up at the first sign of difficulty. I carried on as long as I could, trying strategies to overcome the problem by researching my options throroughly. And I am relieved to be making this change. It feels right to feed Little Man in a way I will enjoy rather than a way that brings me so much pain I dread feeding him. Already I enjoy the single formula feed I give him each day far more than the painful breastfeeds I do the rest of the day and I am looking forward to the time when every feed will be pleasureable once more.

So, I have enjoyed my breastfeeding journey. And it is with a certain amount of sadness that I say goodbye to it. But by ending it now I can hold on to those fond memories forever, unmarred by the pain of the past few weeks.