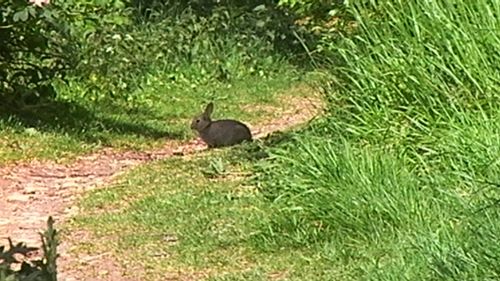 Now that I am starting to feel better, Tim and I have been making the most of the days he has had off work and have been out and about in the open air.

If you’ve been following my blog for a while (i.e. longer than my pregnancy) then you will have a good idea of just how much I love to be out and about in nature. Long or short walks at any given opportunity are a real favourite of ours and as our town is home to the Woodland Trust and also offers a great National Trust property, we have really enjoyed exploring the many varied routes we have to choose from.

This particular tower is located at the top of a deceptively steep hill which we discovered almost a year ago. We have climbed the hill numerous times, including in the snow, and have even walked up it in the early evening dindling light and found ourselves hidden in the woods behind it, meditating and trying to do some yoga (have you ever tried doing yoga in a wooded area? It’s hard to find a flat bit of land!)

But this weekend was the first time we had attempted it since January. The last time we walked up it was days before I found out I was pregnant and although not yet sick, I knew something was amiss as my body just felt different when trying to reach the top of the hill. Surprisingly, I made it up the hill breathing more easily than Tim did, despite my growing bump and the fact I have spent a large part of this year lying in bed. But getting my legs to work was challenging to say the least.

I have hypermobility of the joints, so my knees, hips and ankles often cause me to stumble when walking in areas like this. But with the added instability of my pelvis thanks to the pregnancy, I felt like my hips were wider apart than they should be and co-ordinating them to take each new step was strange. It was like walking with somebody else’s legs!

But we made it, and enjoyed a break at the top, blowing away the cobwebs and just relishing in the fact that although I am still finding this pregnancy hard, I am doing much better than I was.

Which spurred us on to another walk the following day, up a different hill. Perhaps walking up two hills in one weekend was slightly too ambitious, as my legs don’t seem to want to co-operate in their normal way this week after being subjected to such a challenge. But the effort was worth it…

For starters, we got to see three rabbits and a pheasant during our travels and I got to practise filming and taking photos with our new camera. The quality of my photo isn’t great as the wind was blowing and I was trying to stay steady without scaring the last remaining rabbit away before I got a decent shot of it. But what a beautiful gift to find after struggling up that second hill!

We then ended up following a second pheasant back down a wooded trail, which was magical and amusing in equal measures. Have you ever followed the path of a pheasant? It really is quite something.

Eventually we returned home, rather windswept and chilly, and I promptly fell asleep for a good two hours and barely managed to drag myself up again for dinner. I’m looking forward to getting out and about again soon, and hopefully the more we do it the more my body will remember how to climb hills without being totally exhausted by them.

And every single walk we go on reminds me just how much I am looking forward to exploring the natural world with our son in tow… now there’s something to inspire me onwards!