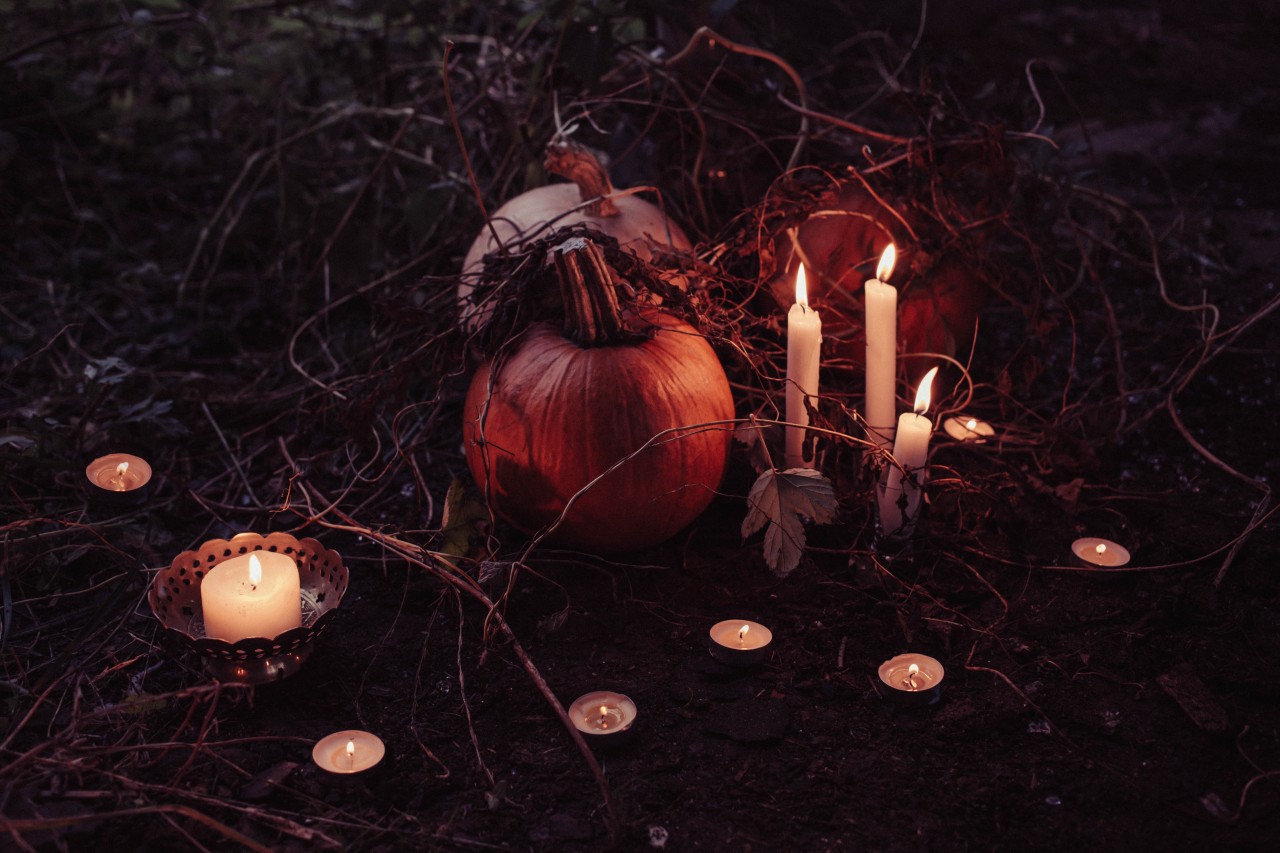 October 31st marks Halloween or Samhain (or even All Hallow’s Eve), depending upon your personal tradition. Halloween has always intrigued me, since long before I began to explore the history and culture behind it. But the more I have learnt about it, the more it has held a special place in my heart. This is particularly true of the more Pagan roots of Samhain.

Within the Wheel of the Year, Samhain falls at the third and final harvest of the year, and so marks the end of Summer. It is a time of giving thanks for the warmth and light of the Summer months, and preparation for the cold and dark days ahead as Winter draws in. And as today was one of the first days we had to de-ice the windscreen before the school run, I am painfully aware of how long the Winter can be!

(As a side note, Little Man refuses to put on his new Winter coat until December 1st, no matter how cold it gets, because for him it can’t possibly be time for that until the month when Winter officially begins comes around.)

But it’s not just the changes within the physical world that we celebrate at this turning point in the year. For many, Samhain is also about going within and reflecting on the changes in our personal lives. And at a time when the outer world is slowly dying away, we can choose to look at the things that are falling away within our own being. Whether that’s old habits, thought-patterns, or actual physical things like ending a job or moving home, there is always some change we can focus on. Because if there’s one thing we can be certain upon in this life, it’s that change will always happen.

In the past, my reflections at this time of year have often focused on the things which I wanted to let go of, or hopes for a kinder future after months of testing times. And had you asked me about this a couple of months ago, when I was completely bed-ridden by the affects of the Summer heatwave on my health issues, I’d have told you that’s where I thought I’d be right now, desperately hoping for change. But here’s the thing, I’ve spent so much of my life waiting and hoping for things to change within my outer world, that I completely underestimated just how powerful inner change could be.

This Samhain I find myself still in a battle with the DWP, back in debt and desperately trying to manage our finances whilst we’re both too sick to work, and frustrated by so much that is happening in the outer world (don’t get me started on what’s happening in the political world right now). But, I am feeling so much more content than I have done in such a long time, and that means that instead of hoping for change to my circumstances I am able to accept them and live my without the high level of fear and helplessness that have been my constant companions for the past decade.

Because, for the first time ever, I have become aware of harmful patterns of behaviour that have affected so many of my decisions and allowed me to end up in some of the most painful situations. It started with the sudden realisation, as the Summer drew to an end, that I have spent my entire life seeking approval. It seems silly to say that I hadn’t realised this before, but as much as I had known I had issues with “imposter syndrome” and never feeling “good enough”, I hadn’t made that additional step to realising that my behaviour was one of seeking approval from others. And, more importantly, seeking it from people who would never be able to give it.

I realised that there is a true beauty in the way that I view the world, and that my inability to accept the status quo had led me to trying to create change whilst simultaneously trying to “fit in” so that I gained that approval. I was torn between walking my own path and towing the line. And it was so incredibly painful that it’s no wonder I got as sick as I did. Nobody can live like that.

Coming out of that initial realisation were several further lessons. The first was that I had spent a large part of my life playing out certain roles which didn’t feel right. No wonder I’d never managed to stay in a role for more than 18 months, and had changed careers completely on so many occasions. What I wanted to do (i.e. write), felt like something that other people got to do. I honestly believed life had to be hard. Even when I chose to write a book, I didn’t have the confidence to just do it. I sought approval for it. And even though I knew how hard I had worked on it, not to mention the quality of that work, I enabled a situation where this would be questioned.

That same pattern is reflected in all areas of my life. I felt like I had simply “bluffed” my way through university, instead of realising that I am simply very good at languages. My tutors were right when they told me I wasn’t ambitious enough, and was capable of achieving more. But, instead, I felt like a fraud for receiving the results I did! The same goes for my blog. I’ve spent years feeling like I wasn’t “good enough”, because I don’t get the kind of page stats that others do. And yet, as I said before, I know I am a good writer, and that stats aren’t everything.

Basically, the past couple of months of my life have been a massive unfurling of the layers of personas I have tried to fit into throughout my life. It has reached every part of my soul, to the point where so much deconstructing has been happening that I feel like I no longer know who I am. And yet, I’m okay with that. At times it is intensely painful, and I scramble desperately to figure out who I am if I am not all of these things I always thought I was. Especially when I question whether people will like the “real me”. But mostly, it is a joyous unravelling of a tangled web which has held me captive for far too long.

And so, this Samhain, I am celebrating the falling away of these old masks I have worn. I am saying goodbye to the patterns I have allowed to rule my life, thanking them for the lessons they have given me along the way, but grateful to see them finally go. And I am welcoming the darkness of the coming months, as a time of quiet hibernation and reflection, as I allow the spark within to begin to grow in warmth and brightness. Today I am grateful for change, because it means that healing is always within our grasp!