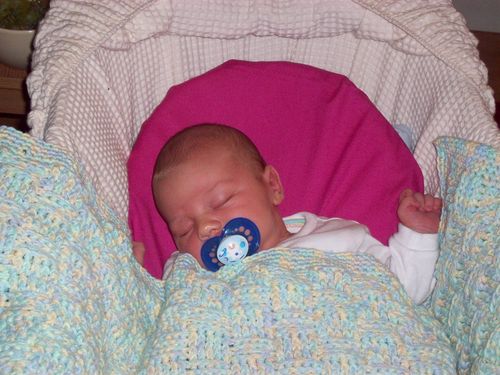 I can’t imagine life without him. In fact we’ve felt really strange the past few nights as Little Man has slept in the spare room with my mum and going to bed without him is really hard, despite the fact we are eternally grateful for the chance to catch up on some sleep.

One Day asked recently how life was going, particularly in terms of feeding and sleeping. Well I can safely say feeding is going well. On Monday he was up to 9lbs 11oz and he is now latching on well to the breast as well as accepting expressed milk through a bottle (meaning I get to sleep at least some of the night!) My milk supply is strong and I often spring leaks as the most inopportune times. I have to wear two breastpads on each side at a time and change them regularly. And Little Man and I have often both been soaked by one side leaking as I feed him from the other side. And when I express I can get between 2 and 4oz and still go on to feed him. So feeding wise we have no worries…

Sleeping is another matter though. Since coming home Little Man has rarely slept for more than 2 hours at a time and more often than not wakes up every half hour or so. He is as exhausted as we are, but unfortunately he is suffering from both terrible colic and a really congested nose. He has been mucousy since birth and rarely burps and has never spit up, not even the tiniest bit, but he gets so gassy and so ends up in terrible pain. It is horrible to see his knees pull up and his face go red and to hear him scream and know there isn’t anything more we can do. We are trying everything but it just doesn’t help him clear the gas.

We actually took him to the doctor yesterday as we were concerned that it wasn’t clearing and that he was struggling to breathe when laid on his back, which is of course how you’re supposed to lay them to sleep. He is a really strong boy already though and we often ended up taking him into our bed to try and comfort him through the night and although we’d lay him on his back, he would quickly roll onto his side to snuggle closer to us. The doctor listened to his chest and reassured us his chest is clear, but prescribed some saline nasal drops to try and clear the congestion in his nose. She explained that his colic is most likely caused by him taking in air when feeding because he just cannot breathe properly and so comes off the breast several times each feed and gasps and then gulps the milk down when he can. So we’re hoping these drops might help. We’re also hoping he’ll stop gagging on the mucus too if he can finally clear it!

So the first few weeks of parenthood have been full of sleepless nights and trying to soothe a baby in pain. But it has also been filled with many sweet moments as Little Man becomes more alert and observant by the day. He loves being sung to, he adores kisses and cuddles, and when he is awake he spends ages just gazing around at all the new things he can see. It is so adorable and I fall a little bit more in love with him every single day.

I’ll be back next week with some more updates, but for now I’m looking forward to TJ finishing his first week back at work and relishing in the fact that we planned his annual leave so well that he now has 9 days off with us to spend chilling and enjoying being our small family of 3. So I’ll leave you with just a couple more photos of my sweet, sweet boy, because who could resist his gorgeous face?

Having a good old look around the room

Snuggled up under the blanket mama made him 🙂