Home & Garden• In the Kitchen 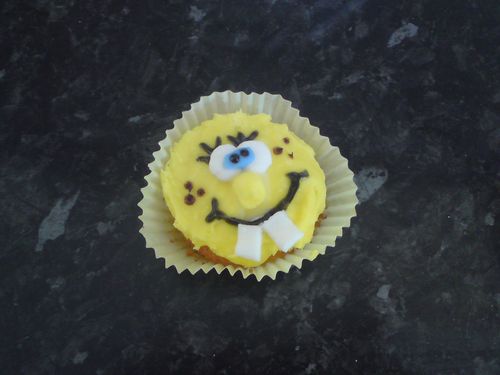 It was Tim’s birthday last Friday and we were supposed to be going to an old-fashioned kiddies party on the Saturday. Unfortunately my sister went down with tonsillitis at the last minute and so the party has been postponed until she is better and able to appreciate all the yummy food (sorry, Alice!). That didn’t stop us making a whole load of SpongeBob cakes to celebrate with though…

Aren’t they just adorable? I can’t take credit for the design or the delicious marshmallow icing recipe because I got both from here. I must say though that I am extremely impressed by the marshmallow icing and have eaten far too many of these little cakes for someone who usually detests icing (even as a child I would rather have a plain cake than one that was iced!!)

We started off by baking the cakes, and I stupidly forgot to get the butter out of the fridge early to soften, meaning I had to stick my tongue out with concentration as I tried to beat it with the sugar…

Two hands were needed, you know!

We made our cakes using wheat- and gluten-free flour from Doves Farm here in the UK. This mix is great as I have yet to work out the right combinations of non-wheat flours to create my own flour mix. The cakes didn’t rise as well as my usual wheat-flour ones as I didn’t quite get the right amount of baking powder in the mix. However, as I wanted to be able to enjoy these cakes as well as Tim we chose the wheat-free option instead… they came out alright in the end!

Some did get a little overdone I must admit as we were so busy melting the marshmallows for the icing that we forgot to take them out on time. Marshmallow icing is so much fun and you can find the recipe here . First you melt the marshmallows until they are gooey and oh so scrummy (try not to eat too much at this point!!)

The end result is an incredibly sticky icing and you need to coat your hands and surfaces in a massive amount of icing sugar to even begin to work with it (which took me a long time to figure out)… in fact I gave up on rolling my icing very quickly and went for putting blobs of it on the top of each cake and spreading it out with my fingers, carefully.

Can you see the beginnings of a SpongeBob? I have all sorts of ideas for using this recipe at Halloween (pumpkins, witches and ghosts) as well at Christmas (Santas and penguins) and Easter too (bunnies and chicks). For all the time it took, and that was a lot, it was all worth it to open the cake tin each day and see a host of SpongeBobs staring out.

Not that there are many left, as you can see. I have been eating two at a time and even offered one to the man who came to fix our radiator yesterday… the look on his face when he saw them was just classic!

Why not have a go one afternoon, if you have the time to spare… and don’t forget that the leftover marshmallows will keep you gasping for cocoa each night as you curl up with a good book 🙂

Out in the Garden

A "Grade A" Place

This is from the government's own website. Food pa

Tim has made me a delicious rice bowl for lunch. N