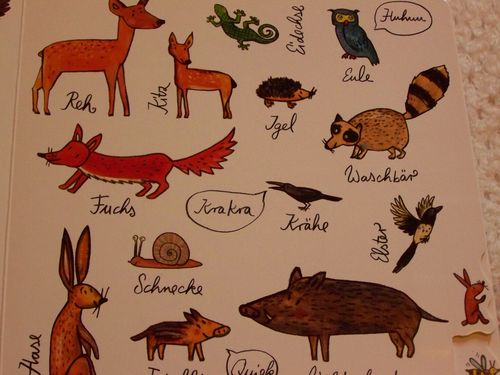 Do you remember me mentioning the German books and CDs Little Man and I were enjoying in the run up to Christmas? You might even remember I have mentioned wanting to create a “German For Families” series here on the blog. But I haven’t managed to get around to much of that yet.

That isn’t to say that we aren’t using certain words and phrases with Little Man, as we are. It’s just that I had wanted to create the series for the blog based around what worked well for us, and so I have yet to figure that one out. Let’s say it’s still an experiment in the very early stages right now!

But as Ruth, over at Mixed Bag of Allsorts, recently wrote a brilliant post about her trilingual adventures with her own son I thought it might be good to link up and share with you what we have been doing in case you want to start having a go yourself and don’t quite know where to start.

Incidentally, if you have never visited Ruth’s blog, I do suggest you pop over and have a look.

As you’ll see, Ruth is using both French and German with Andrew, and as she has studied both languages to a high level, she has a certain level of fluency that may be difficult for some people. But you don’t need to be fluent to enjoy sharing a foreign language with your child.

Think about it, a child can communicate quite effectively even when they do not have the same vocabulary and grammar skills that we as adults do. I honestly believe that giving a child an early start even with the most basic language skills you will give them a much better headstart in life. They will grow up knowing that other language exist, they will have a basis from which to work from, and in some ways although mistakes can be hard to correct, an inaccurate but working knowledge of a language will help your child communicate with a far greater number of people than no knowledge at all.

Which is why we are trying to use German (and French) words and phrases with Little Man right from this very early age. I have a fairly fluent level of German, and the majority of our resources focus on this language. However TJ and I both studied French to GCSE level and although this is basic stuff, we want to try and pass that knowledge on to Little Man too.

I have asked a friend to look into creating a “French For Families” series to accompany my “German For Families” series once we get going. So I do hope you’ll keep this in mind and join with us once we get started. But for now, I thought you might like to see some of the books we have been collecting to help with this. Several of these have been bought in charity shops (you’d be surprised how many foreign language books turn up in these!) and some have been gifts. But with the ease of ordering books from all over the world with sites like Amazon these days, you can easily build up your own library very quickly!

I think my favourite book has to be Schau mal, so viele Tiere

. It has five double page spreads with beautifully drawn animals in themes such as “home and farm” and “insects”. And some of these even have what the animals say in German (because it’s not always the same as in English, you know!)

But you don’t need to have specific books like this to use a foreign language with your child. We use a variety of books in both German and English, using words in both languages with each book.

Most of the books we use right now are very basic, not only because they are easier for Little Man to follow at this age, but also because books with just a single word or short sentence on each page is easier to use for focusing on one or two items and learning the same word(s) in multiple languages.

. This page, for example, allows us to use the words for “white”, “flour”, and “eggs” which will all come in useful when Little Man is a little bit older and I introduce him to the fun of baking (I just hope he makes a little bit less of a flour-cloud than Kipper does!)

We also have one of the Usborne Touchy Feely Books that Ruth mentioned in her post. We have the That’s Not My Tractor…  one. Can you spot the mouse?

But again there are no hard and fast rules as to what could work for you. For instance, you could keep an eye out for flipcharts and postcards with images of the words you have been learning, just like this one which we found in a local discount store!

Don’t forget that kids love to sing! It doesn’t matter if you sing in tune or not, they don’t care. I’m sure you know plenty of songs in your own language, but what about those in another language? I was lucky enough to learn a few folk and children’s songs and rhymes during my time in Germany, but even so I have found CDs like Bi-Ba-Butzemann: Lieder aus frühen Kindertagen

incredibly helpful in learning even more.

An added bonus of CDs and DVDs is that your child will get to hear true native speakers and pick up on accents and intonations that you may be unable to accurately copy yourself.

I hope that this has given you some ideas for introducing a foreign language to your own child. Maybe you’re already doing this anyway. If so, do leave me a comment and let me know what you do in your house to use other languages, as it’s always good to compare notes!

Disclaimer: In keeping with the ethos of this blog, it seems appropriate to explain the use of links and resources in this post.

All of the books and the CD have been used by us and I share them as a recommendation for ways to start introducing languages to your child.

I have NOT been contacted, sponsored or paid by any of the authors, publishers or agents of the resources.

However, the links provided go through my Amazon Associates account, meaning that if you click on them and then go on to purchase any of the items mentioned using these links, I will receive a little bit extra cash to go into my own “book fund”.

“Darling” – the funny names our kids give us!

For The Love Of Pottering