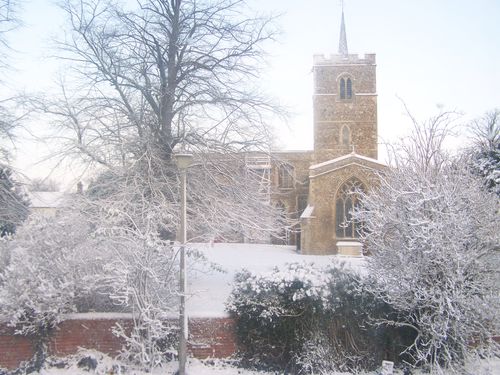 Oops, I am a day late with this, thanks to returning home after almost a week away and not wanting to do more than curl up on the sofa with Tim and watch the colourised version of “It’s a Wonderful Life”. Can I just say that I thought it would be totally wrong to watch it in colour, and I shall definitely be watching it in the original black and white again before Christmas, but it really isn’t that bad!

Anyway, that being said, I am writing yesterday’s post today and shall write today’s post on Tuesday next week! So, without further ado, let’s get on with it.

With the recent warnings of snow and the upcoming advent season (and the relaunch of my Advent Series), I couldn’t help but remember where we were last year…

This time last year, the above church was the view from our house.

This time last year we lived in a village with neighbours who enjoyed entertaining so much that it became a regular occurrence for us all to take part in “Safari Suppers”, hosting others for one course and going on to another house for the next one.

This time last year I spent glorious hours with Pippi, our neighbours cat, who would keep me company on the coldest and darkest of days when Tim was at work and I was home alone.

And this time last year I had a job, which despite its demands and difficulties, meant I could provide for my own little family of two and enjoy a little bit of extra “splashing out” (read: a couple of presents and Christmas Dinner).

Outwardly it looked like I had the best of life: our home was cosy, and we both had work (a far cry from the year previous when we lived in a damp flat and had been on a single income for several months). But underneath it all I was falling apart.

This time last year my outlook was bleak…

I was dealing with a certain amount of discrimination and pressure at work, thanks to my health

I was inconsolable, coming home after a day in the office and crying most of the night. Somehow I pulled myself together enough to get on the bus each morning a 7.30am, turn up to work with a smile on my face and deal with every single one of the difficult customers who entered our office, and then make the hour’s commute back home again before I would fall apart. But fall apart I would, and this time last year I hit my limit.

Through sheer determination, we have made it to where we are today: married, trying to start a family, and therefore free of medication (on my behalf). Life is still hard, but in different ways. No matter what we face now, it is nothing compared to what we have already faced together, and I only have to look back to this time last year to know how true that is…

Outwardly it may seem like we have moved backwards, but inwardly we have made leaps worthy of the moon landing!

Getting Stuck in Fight or Flight