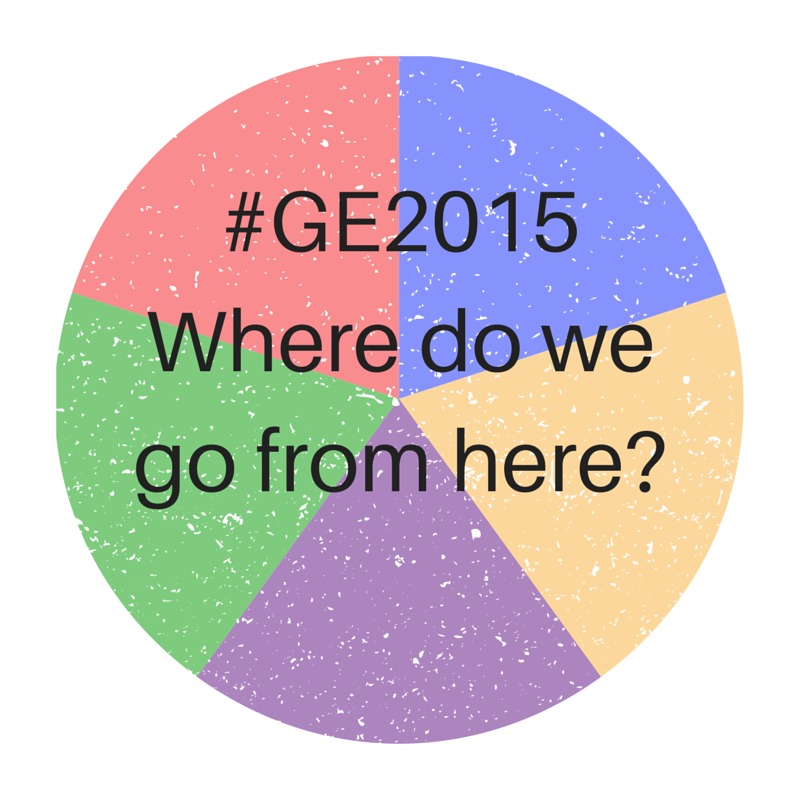 Along with so many others, I watched the election results this week in stunned disbelief. Never in my worst nightmare did I ever imagine the Conservatives would win a majority, which again seems to be a common reaction to the news. In the weeks leading up to the election, I had spoken to many people and heard just as many opposing views and, along with the debates, this had given me the strong impression that we were heading for another hung parliament. How did we go from that, to this?

I know that many people feel that there is very little difference between the parties, and therefore there was no real choice in this election. It is the very reason many non-voters give for choosing not to cast a vote this time. A few days before the election, I posted a link to this article along with the words, “I strongly believe that casting your vote is a big part of how we engender change, working with politics and politicians to focus light on the issues that matter most. It isn’t going to change overnight, but not voting is like accepting it “as is” and allowing it to go on unchallenged.” And I still do believe this… but our system is so flawed with its First Past The Post (FPTP) that it feels incredibly disheartening to realise how very little our voices are heard.

Somehow, as a nation, we have ended up with a majority Tory government, with more votes than they had last time, despite all that we have been through in the past five years. I can’t, of course, blame that completely on the FPTP system – people have clearly (and rightfully) cast their vote for the Conservative Party. But in many ways that makes me lose faith in where we’re heading as a society – do we really value the lives of others so little that we’re happy to ignore the fact that under the previous Tory government the rich got richer and the poor got poorer? Austerity measures were the worst thing to happen to our economy, and yet so many people believe the Tory Party rhetoric that they need time to finish what they started! But when you begin to really look at what we’ve voted for, it makes for an extremely depressing read.

Let me tell you something – as a family we will be hit hardest by the Tory Party plans. We’ve already suffered under the previous Tory government, but it will be even worse this time around. In the past year alone we have seen: our tax credits cut so much that we could not afford the childcare we needed, leaving me in a very stressful and unpleasant situation in my previous place of employment; my inability to claim JSA despite being made redundant, due to having not paid enough NI Contributions during the two years I stayed home with Little Man and returned to work in a part-time capacity only; and an increasingly difficult battle to receive the medical care and support TJ needs for a debilitating condition due to lack of funds in the NHS.

As a family with a disabled father, a young child, and a mother who has chosen to put her career on hold (consciously choosing a lower level and therefore lower paid role) in order to meet the immediate needs of her family, we are going to be hit the hardest by the coming government’s plans. We will struggle to make ends meet, and fight an even harder battle to receive the care we need from an NHS that is crumbling into ruins, no matter what the Tories say. Far from the “benefits scroungers” that they would have you believe are the cause of the problems, we will battle on regardless with almost minimal support from the government.

TJ will continue to work as hard as she can, despite being so sick that she had to miss 40 days of work last year due to being unable to even get out of bed. The days she works are days filled with immense pain, clouded by a fog of mental confusion caused by her medications and side effects nobody would wish on their worst enemy. She will do so, because we cannot afford for her to even consider reducing her hours. And I will continue to work fewer hours so that I can balance childcare, caring for my wife, and providing for my family in a way that doesn’t kill me. But more than that, we will rely on family and friends more than ever before, and we will fight for change.

Because whilst we will be hit hard, we are still incredibly blessed. We have a roof over our head and food on our table – some people are not so lucky. How crazy is that? How can I even be sitting here, in one of the world’s wealthiest countries, mentioning food poverty and homelessness? It isn’t right!!

Thankfully I am far from alone in feeling this way. My absolute horror that, as a nation, we voted in a Tory government that cares so little about the most vulnerable in society, has been reduced significantly over the past 24 hours as I have read the reactions of others across the UK. Let’s start with the fact that, despite getting a majority vote, the Tories received a significantly smaller percentage of the votes than the losing party in previous elections! Again we come back to the flawed FPTP system, and the fact that:

“In real terms, this means that Cameron’s Tories won the support of only around 24 per cent of all those who could have voted. The ‘none of the above’ party of non-voters totalled 34 per cent, finishing a close second this time. Millions of those who did vote will feel no more represented than those who did not, notably the almost five million UKIP voters who ended up with one MP between them.” – Did the Tories really win?

This gives me hope, more than anything else, that we are not alone in feeling so utterly disappointed in the result of this election. Our electoral system is far from representative and therefore millions of people throughout the country feel just as passionate about creating change. But how do we do this? How do we engender change when our voices are vastly unheard, at least when it comes to politics?

I think Russell Brand says it pretty well in his recent video calling for us to live with compassion.

“One thing I know for certain is there’s going to be no shortness of meanness… we’ve got to find new ways of being compassionate and new ways of making change.” – Russell Brand

Compassion is something we can all strive to live by. It comes in so many guises and every single act of compassion, no matter how small, can all add up to a far greater life for us all. It could be as simple as stopping for a few extra minutes to talk to an elderly neighbour who may cherish those few moments of friendship with you, or buying an extra bag of tea during your weekly food shop to donate to the food bank. Or it could be as dedicated as volunteering for a local cause or speaking out about injustice on a local, national or even global scale. Whatever form compassion takes for you, know that it will make a difference.

The last thing we want or need right now is for the news of the past few days to throw us all into a state of apathy or a belief in hopelessness and helplessness. We can create change, indeed we must create change, it’s just we have to find new ways of doing this.

And on that note, I wish to leave you with a song by one of my favourite artists, Damh The Bard, entitled “The Sons and Daughters of Robin Hood”. Damh wrote this following the 2010 election and shared it again in light of the results from the 2015 election. The chorus line has been running through my mind since last night and I invite you to join me in singing along and finding your own way to make that change.

“If you thought that we would do nothing, You’ve misunderstood! For we are the Sons and Daughters, of Robin Hood!”