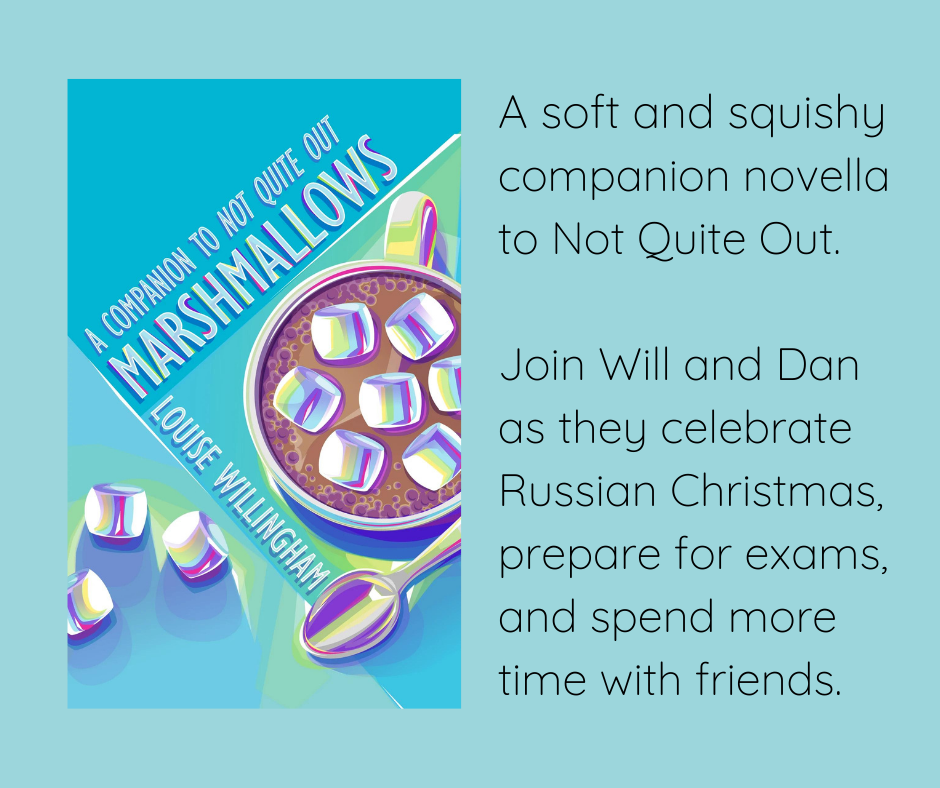 Long time readers of A Spiral Dance will know just how much I adore Not Quite Out by Louise Willingham. So imagine my absolute joy when I heard about its companion novella, Marshmallows! I was lucky enough to beta read an early version of Marshmallows, and this review is based upon that. However I cannot wait to get my hands on a signed copy of the paperback when it comes out next month.

Marshmallows picks up right where Not Quite Out ended

If you read Not Quite Out, and I highly recommend that you do, you’ll know that it ends with Will finally feeling able to come out to his friends as bisexual and acknowledging that his relationship with Dan is romantic. And whilst that was a really lovely end to that book, it’s so lovely to see how things change for them all after this pretty monumental event.

Within Marshmallows we not only get to see how Will and Dan settle into a new stage of their relationship, but also how their friendship group has changed. A lot of conflict occurred in Not Quite Out between Will and his friends, as he remained secretive about his friendship with Dan and the challenges he was facing. His friends were understandably confused and concerned when Will started spending time with this new guy none of them really knew anything about, especially with his ex Matthew spreading lies. But now everybody knows who Dan is, and some of what he has been through, and they rally around both him and Will to offer their support.

This is something I really loved about Marshmallows, because as much as I enjoyed seeing Will and Dan together, everybody needs a community around them and they have got a wonderful group of friends. When Will is worrying about leaving Dan alone whilst he has an exam, his friends all turn up to keep him company. And it is Lilley and Cas who first give Will the idea to create a Christmas celebration for Dan according to the Russian calendar.

Speaking of the Christmas celebration, it was really exciting to me to see Will actively encouraging Dan to share his heritage with him. We know from Not Quite Out that Dan is very self-conscious about his accent and that he wasn’t able to fully be himself in his past relationship. So when Will sets out to celebrate Christmas in January, it means so much to Dan. And then when Dan starts bringing in more Russian words and phrases, Will laps them up.

Can we take a moment to also appreciate how wonderful it is to see the Russian words written on the page in Cyrillic and not transliterated? I really appreciate that. Not just because I can actually read Cyrillic, but because it means the language isn’t being forced to become more palatable to an English audience. It’s actually easier to switch your phone into a Russian keyboard and type the words into Google translate when they’re written on the page in Cyrillic, than it is to look up a transliterated word. And if you want to learn the words, why not learn them as they are written? As a linguist, this is something I feel very passionately about.

It’s not all sunshine and roses

As squishy and lovely as Marshmallows is, it isn’t all light and happy however. This is Will and Dan we’re talking about! And we all know that trauma doesn’t just magically go away when we fall in love. Dan continues to deal with the fallout from his previous relationship, and his continued desire to deal with his addictions – this time its smoking. But we also get to see more of Will’s difficulties too.

We know from Not Quite Out that Will gets very anxious and easily overwhelmed, as well as wanting to be there for absolutely everybody, often at the expense of his own health and wellbeing. But in Marshmallows we begin to see how this impacts on his relationship with food. Will repeatedly skips meals, even when he knows he should eat, and sticks to certain foods he considers to be “safe”.

As someone who has had a complicated relationship with food since childhood, and very much suffers from disordered eating to this day, I appreciated seeing this handled in such a sensitive way. I spent a lot of time when I was younger thinking I couldn’t have an eating disorder, because all anyone ever talked about was people trying to control their weight. And this is a huge oversight, because for many of us it comes from feeling out of control in our lives and has very little (if anything) to do with our weight.

As Will puts it so well:

For a moment, I remember how impossible I found it to eat lunch with Lil and Cas—and I wonder if that’s something I should try explaining to him. But what’s to explain? I’m stressed. Eating food just gets in the way when I’m stressed like this.

I also appreciated how much his friends picked up on this and worried about him. Far too often we think we have successfully fooled people with our excuses, but those who are close to us understand more than we give them credit for. One of the absolute sweetest moments for me was when Will was utterly exhausted and hadn’t eaten enough, and so when Lilley went for snacks she made sure to get him some fruit he would eat, and then Dan went and washed them for him so that he felt safer eating them.

Will himself gets completely overwhelmed with emotion at this point, which is entirely understandable. So many of us feel shame about the way we are with food, and so being cared for in this way without any need for explanations is such a relief.

“This is Will saying the fact you went out of your way to make sure I felt happy eating these little grapes means you must love me. You’re looking after him, Dan, and he’s not used to that.”

The love between Will and Dan is so cosy

Let’s be fair – Will and Dan have loved each other for quite some time, right? They had a very close, intially platonic, relationship from very early on in Not Quite Out. Will has seen Dan at some of his worst moments, and Dan has equally supported Will through some very intense emotions. So seeing them finally together and able to fully express how much they love each other is a dream.

There’s a sort of cosy familiarity about it, as they fall into the same rhythm they established in Not Quite Out by sleeping in each others rooms and being around each other so much of the time. Dan helps Will revise for his exams by asking him questions, and Will reminds Dan to take his meds. It’s the kind of love I always yearn for.

And so when Dan approaches the idea that he might never want sex, an expansion on the “I’m not ready for another relationship” we saw in Not Quite Out, it seems completely natural when Will responds in the way he does.

I love him with every single part of me and, if Dan isn’t interested in sex—now or ever—that’s fine. It doesn’t make a difference.

As an asexual person, this is the kind of thing I love to see. Dan doesn’t outright say he’s asexual, he might not even know that’s what he is – how many of us take years to figure out we’re ace? But it’s clear to me that this is asexual rep. And it’s wonderful.

We need more stories like this, where characters get together and it isn’t all about sexual attraction to each other. What Will and Dan have is special, and it is perfect for them. And it is far from lacking in sweet, delicate embraces and signs of affection. Will falls asleep in Dan’s arms whilst they’re out with their friends, for crying out loud! You don’t get much more affectionate than that.

Marshmallows is the perfect name for this soft and squishy read

When I heard Lou had decided to call the novella Marshmallows I realised it was the perfect name for it. It is warm and comforting, with a little bit of decadence to it, just like marshmallows sprinkled into hot chocolate on a cold, Winter day.

I absolutely adored this book, as much as (if not more than – shhhhhh) Not Quite Out, and I would highly recommend you read it. You can grab a signed copy from Queer Lit if you’re in the UK or Lost Boys Press lists other places you can buy it.

And if you’re able to get to Manchester on Saturday 19th November, you can even meet Lou at her book launch party at Queer Lit.

Finally, if you pre-order the book, you can sign up for goodies here.

I’m so grateful my wife came out as trans!

What Asexuality Means To Me - The Diverse Voices of Ace People