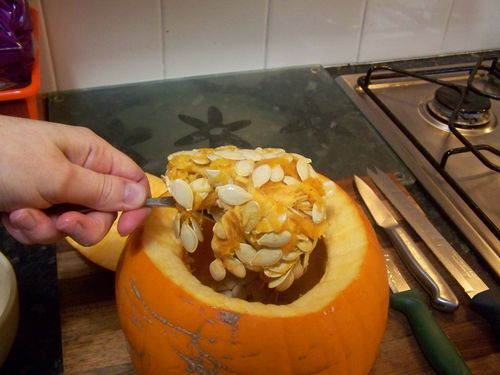 As it is Halloween, and Tim has gone mad (almost as mad as I go at Christmas), I set out to make some awesome pumpkin cakes for our Halloween party. I am planning on attempting some more marshmallow icing today, and will post an update on how that goes later. But for now, let me share the fun three hours I spent in the kitchen yesterday making not just one batch of cupcakes but also pumpkin bread.

My first chore, was of course, to scoop out all the pumpkin seeds and then cut/scrape out as much flesh as I could without ruining the pumpkins that Tim will be carving into lanterns tonight. It was a messy job, I can tell you, but still quite enjoyable.

I then quickly boiled up and mashed the pumpkin flesh. The recipe called for canned pumpkin, but I have no idea where to get that from in the UK and also I enjoyed playing “waste not, want not” by using my pumpkins for both food and decoration.

I beat the butter with a wooden spoon (not having a mixer as suggested in the recipe) and then creamed in the sugar, before adding half the pumpkin mash I had made to the buttermilk and combining it with the flour/spice mixture and eggs.

This is how they looked going into the oven. It’s actually the last photo I took as well, because things suddenly got a bit more complicated and taking photos slipped my mind. For you see, while they were baking in the oven I set about cleaning my bowls and utensils so I could make the pumpkin bread and put it in as soon as the cupcakes came out.

So, I have no photos of the bread making process either and I cannot share the bread recipe with you as it isn’t mine to share. The cupcakes are another story, however, as I converted measurements, combined two recipes and made substitutions and so it feels more like “my” recipe than one from someone else’s book. So here goes…

I hope that made sense… I shall be back sometime soon with an update on the decorating.

No garden too small

Out in the Garden

I'm currently waiting for a chest x-ray and am usi

O came in to my room and said, "it's a lovely rain

Hear how Will and Dan first meet. So I'm not a nar