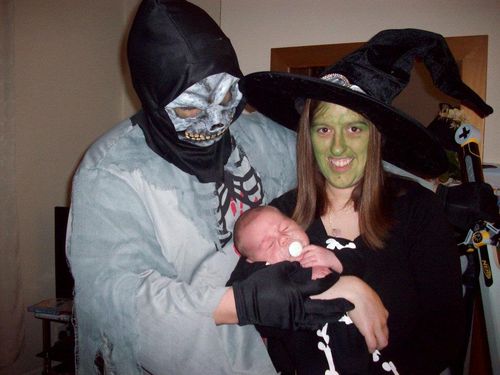 Can you believe it is November already?

I cannot say that this year has zoomed by because it hasn’t. I spent the majority of January through to September feeling pretty darn miserable. But now that the pregnancy is over and my mind has pretty much blocked almost the entirety of my pregnancy experience it feels as if we were celebrating last year’s Halloween just a few short months ago. It’s like I have lost 9 whole months. Not that I’m complaining, this time of year (October to December) is my absolute favourite. But still, it’s weird!

I also realise I have so much I want to get done before Christmas and so little time to do it that I really am going to have to prioritise. One such thing is sorting out this blog. I’ll tell you more about that another day but it does make me realise how fast time is flying by and how much I want to do now my sweet boy is here with us.

But for now we’re just enjoying having some fun. And that includes celebrating Halloween, which is always a big deal in our house as, for TJ, Halloween is as big a celebration as Christmas! In fact, Little Man had not one outfit, not even two, but three different Halloween outfits to wear! One was the skeleton you see above, which he wore when answering the door to the trick or treaters with his daddy. The second was a pumpkin outfit, which daddy took a photo of on his tab and which I must download to share with you all sometime. And the third was a sweet long-sleeved top with a cute picture of a mummy on (the Egyptian kind) which also had the words “I love my mummy” on. I’m not sure whether I actually took a photo of it or not. I probably did, but as I am switching between using my phone, the camera and the video camera to take photos and videos at every possible moment I’ll  be darned if I can remember which one it is on!

Although I am cherishing every moment and do not want to wish the year away, I have to say that a part of me kept thinking “I cannot wait until next year” as Halloween will be even more exciting with a one year old toddling around in a cute little outfit. And it will be nice to have him sharing in the Halloween treats rather than trying to breastfeed him while eating my own lunch. I don’t mind doing it, in fact I love breastfeeding my little man, but it seems such a shame when he is discreetly tucked away under my nursing cover when we have guests around. I’d much rather his grinning face shine out from the other side of the table while we were eating.

So that’s that. Halloween is over for another year. Now starts the Christmas preparations. I’m going to need every second between now and Christmas as my little man takes up so much of my time (and rightly so) but it does mean that I need to get super organised to make sure everything is done on time this year and not finished in a mad panic on Christmas Eve as seems to be my pattern of late.

TJ is off work this week so there is an extra pair of hands to hug the little dude, so I hope to get cracking on some of the Christmas prep as well as making the changes to and updating my blog with all the things I have wanted to write about but haven’t found the time for. Because, let’s be fair, I’d much rather be hugging my boy than typing on the laptop. Who wouldn’t, when you get this sweet face to gaze at?