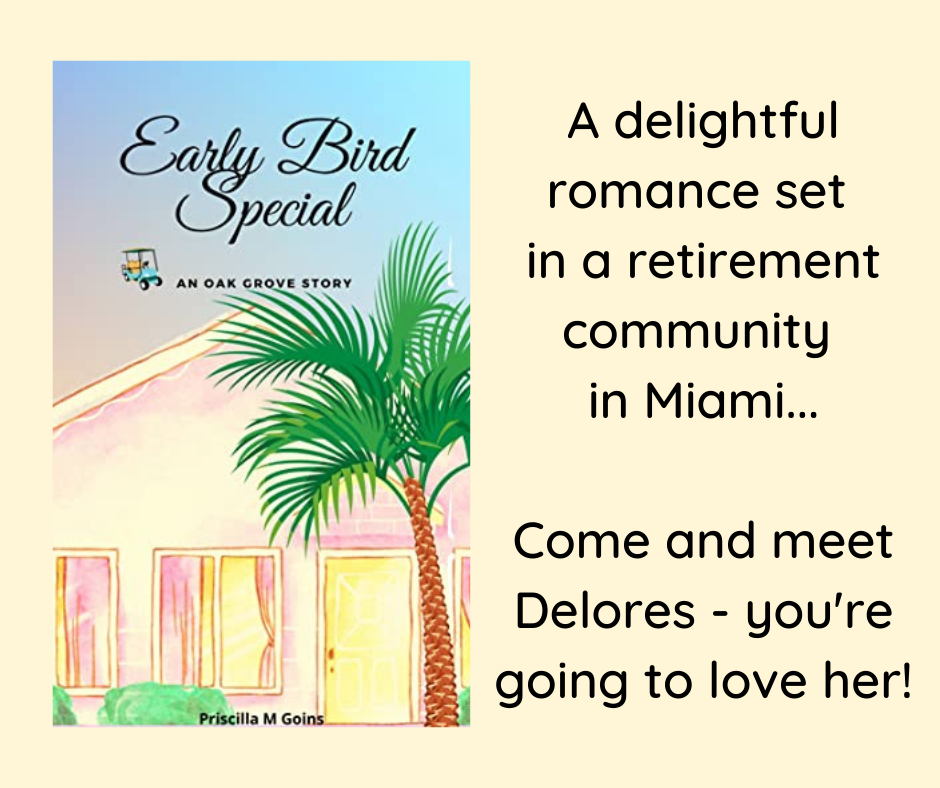 *Ad| please note that this post uses affiliate links. Where used they will be indicated with an asterisk*

I hope you know by now how much I love sharing a good book with you all, and have I got a good book for you today! Early Bird Special is a contemporary romance novella, set in a retirement community in Miami, and follows the antics of Delores as she attempts to set up her grandson Dylan with the community’s Activities Director Abby. It’s a tale as old as time, isn’t it? An interfering mother, determined to marry off her child, who is happy enough on their own. But just you wait until you meet this cast of characters – you’re going to love them.

Delores is a force to be reckoned with

Within the first 300 words of the story, Delores manages to persuade her son Dylan to change his plans to fly her out to Atlanta, where he lives, for a weekend trip, to an entire two week trip to Miami, where she lives. Complete with itinerary. She’s had it planned for weeks. As soon as Dylan has put the phone down her friend Ernestine asks her how she’s managed it and she explains how easy it was, she just contacted a few of his friends and his boss. She’s a sneaky little thing!

Throughout the book she continues to pull strings here and there, and has quite the turn of phrase. She’s honestly such a delightful character, and it’s wonderful to see an older character take such prominence within a story, especially a romance. Be prepared to get to love Delores, and know there’s more to her than meets the eye. She’s hiding something big. A couple of things, in fact. I told you, she’s sneaky.

Dylan and Abby – a romance or a fling?

Of course, Delores’ matchmaking skills are on point. Of course they are. Dylan and Abby hit it off pretty quickly, but there’s one problem – he’s only in Miami for a couple of weeks. So what should they do? Do they enjoy a holiday romance? Is that really enough? Especially when they have to eat so early in the evening, like the retirees, at the “Early Bird Special”. Or do they somehow attempt an ongoing, long distance thing? How would that even work? Is it worth the effort, or should they just give up now? This is not what either of them signed up for!

Of course, love doesn’t really care about that, does it? It isn’t convenient. And within the pages of this book we see the lives of all the inhabitants of Oak Grove change significantly. I don’t want to give away any spoilers, but these characters go through various highs and lows together, which makes the ending all the more sweeter.

One of the biggest highlights of Early Bird Special for me is seeing older characters getting such prominent voices within the story, as I’ve already said, and the way that loss and grief are covered within the book. I love how Delores struggles with admitting to Dylan that she has moved on from her lifetime with Walter, his grandfather. This is something that is very rarely talked about. Giving a character about to turn 80 such a feisty voice is a wonderful thing. And the way that she and Ernestine drive past Gloria Sherman’s house, with their thumbs on their noses, waggling their fingers, gave me so much joy! As Abby says, “Most of the residents were in their seventies and eighties but they formed cliques just as tight and impenetrable as tenth graders.”

I also really loved the developing romance between Dylan and Abby. It wasn’t forced, even though Delores had initially forced the issue. Both of the characters just suited each other really well, and they settled into a rhythm really quickly. And yet even when they were unsure of where it was going, they gave each other space, without dramatics. There was no need for a massive argument or an overly contrived plot piece to happen to push them apart (or together). They were simply allowed the space to work it all out for themselves. I really appreciated that as a reader. Too often in romance books this isn’t the case.

Finally, the thing I loved most about Early Bird Special is I got to read it as a beta reader (if you don’t know what a beta reader is, it’s someone who reads the work before it is released, to give feedback to the author). This means I got to leave little notes throughout the document for Priscilla about all the things I loved, which as a reader is an absolutely delightful thing to be able to do. I wish I could do that for every book I read!

Get your copy of Early Bird Special

Early Bird Special is available from January 2022 and you can get it in eBook or paperback from Amazon UK* or Amazon US.

Review of Sistersong by Lucy Holland

“I Am Unapologetically Me” – My Affirmation for 2022

"I Am Unapologetically Me" - My Affirmation for 2022