Review of Sistersong by Lucy Holland 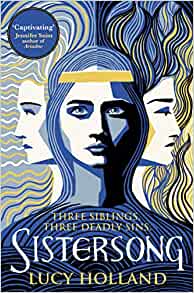 I don’t particularly like writing critical reviews of books, I’d much rather be sharing the books I have loved with you all. But having talked about Sistersong with a friend, I was encouraged to write this review so that people would know what to expect with this book. After all, I went into reading it full of excitement given the premise of the book, and the many glowing reviews about it, but was left struggling to finish it for various reasons which I will get to within this review.

Before I begin writing the review I want to make a note of the content warnings. I’m not sure if these are listed in the paperback or eBook versions of Sistersong, but I don’t recall them being listed at the beginning of the audiobook, meaning I was rather taken aback by a lot of the content. Here is a list of content warnings that I believe should be included with this book as a bare minimum. There is a far more detailed list at Trigger Warnings Database.

Please read the rest of this review with these content warnings in mind!

Sistersong – a Retelling of the Folk Ballad, The Twa Sisters

The premise of Sistersong is that it is a retelling of a murder ballad, most famously known as The Twa Sisters, which dates back to the mid seventeenth century. There are numerous versions of this folk ballad, with some variations between them all, but the basic storyline is of two sisters, one of whom kills the other in a fit of jealousy over the affections of a man.

Lucy Holland has taken this storyline and woven around it various other threads to turn it into a novel. Sistersong is set in post-Roman Britain, when the west of the country is under threat of invasion from the Saxons. Within the hold where the three sisters of this novel live, there is another conflict brewing – that between the old gods and the new Christian God. The Christian priest Gildas holds power over the King and his Queen for much of the story, whilst the sisters lament at the loss of their power which it tied to the land. Much of the story focuses on this and its role in protecting the hold from invasion.

However the original ballad is not forgotten, and we see it play out in the characters of Riva and Sinne. As the story develops, their relationship is strained and eventually destroyed when Tristan enters their world and breeds jealousy within them both. It is a heartbreaking story, and one I will get to in more detail later on. For now I just wanted to mention that the story of the two sisters that Sistersong is based upon does make up at least part of the overall narrative.

Yet my overwhelming feeling upon completing the book is that the main focus is actually their third sister, Keyne, who is rarely a part of the original ballad and even when mentioned only plays a minor role. Keyne is a transgender character who is desperate to be accepted as the man he is in a world full of misogyny and denial. He fights the entire book to be taken seriously, and does indeed eventually become the new king, but it is a battle that is hard won. And I cannot help but feel that the creation of this character was driven more by tokenism than anything else.

Let’s look once again at the original ballad Sistersong is based upon. There are two sisters, torn apart by jealousy over the affections of a man. If a third sister is ever mentioned, it is never as a transgender character. So what was the purpose of doing so in Sistersong?

Don’t get me wrong, I love a good bit of representation in the books I read, and hearing that Sistersong had a trans main character was a big selling point for me. And upon reading the first few chapters I was actually intrigued by Keyne and wanted to hear more of his story. But very quickly the transphobia began. And it wasn’t resolved until the last few chapters of the book, at which point the acceptance of Keyne (or Constantine as he chooses to be called at this point) by his father is only made on the King’s deathbed.

There is a whole lot of transphobia in the rest of the book, including (but not limited to) Keyne being forcefully stripped of his clothes and forced to wear a dress, misgendering on every page, and public ridicule. If the purpose of the addition of Keyne was to offer representation to the trans community, it is a very poor one. There is trauma after trauma throughout Keyne’s story, and he is forced to simply deal with it and continually fight for acceptance, with just a couple of allies, one of whom purposefully hides their own genderfluidity from all but Keyne. There is nothing affirmative here, rather it feels more like trauma porn.

Speaking of which, there is another very damaging portrayal within the book, and that is Riva’s disability. Once again I have to question why the author chose to make Riva have such severe injuries from a fire in her youth that her hand and foot are disfigured by scars. The only conclusion I can reasonably come to is that this was meant to make her ugly and unlovable, as this makes up a large part of her story. She talks repeatedly of how nobody will ever love her, and how jealous she is of Sinne’s beauty, and this internalised hatred of her injuries and fear of losing the one person who has loved her* to her sister is what eventually leads to the murder of Sinne.

* note, there is another, the black smith, who loves and cares for Riva deeply. But she refuses him repeatedly.

Furthermore, it is Riva’s enchantment with Tristan that almost leads to the ultimate downfall of the entire hold. And despite being the daughter of the king, she is imprisoned and very nearly put to death by the residents there, spurred on by the priest Gildas. Her story is one of devastation and betrayal, which would never have happened without her feeling so unloved in the first place. Which begs the question – was her disability used merely as a plot device?

My answer to this is a resounding yes. Riva spends the whole book resentful of her injuries, despairing at her future, and ultimately betraying her entire family and home because the enemy offered her some affection. Which is the ultimate playbook when it comes to using disabled characters as the “villain”.

Other things to be aware of within Sistersong

There are several scenes in which both Riva and Sinne remember the fire which injured Riva. These are pretty graphic and may well be triggering to some. Be warned, as they can crop up in the middle of a chapter without much warning.

Graphic scenes of violence and/or injuries

Body mutilation of a dead character

This scene was the most shocking for me, because I hadn’t actually read The Twa Sisters before reading Sistersong and had no idea they would make Sinne’s dead body into a harp using her bones for the frame and her hair for the strings. Be warned, this scene is incredibly graphic!

Quite a few of the problematic events come from religious persecution in the name of Christianity. The character Gildas holds a lot of power within the book, especially at the beginning, so be aware of this if it might be triggering to you.

You may be thinking from this rather critical review that I don’t like Sistersong at all, but I want to expand on this a little bit. I think the retelling of The Twa Sisters is an interesting idea. I also think a story set in the time, with the threat of both Christianity destroying old religions and the Saxons invading, is a great idea. I’m not even opposed to transgender and disabled characters – I think we need more of both of these.

However Sistersong falls far short when it comes to including these characters. It rather lazily relies on damaging stereotypes to prop up the plot, and does more damage to those characters than good. Perhaps I am being too harsh, perhaps the whole point was to show how rife transphobia and ableism are. But personally I found this incredibly distressing in a way that didn’t seem necessary.

I was surprised when I looked online to see if anybody else had mentioned these things in relation to Sistersong, because whilst a few reviews mention transphobia and, to a lesser degree, ableism in their content warnings, most of them still give Sistersong a glowing review. But these two issues made it very challenging for me to finish reading the book – I had to read it in short bursts with lots of breaks in between – and I cannot be the only one that feels this way. So I hope that this review provides you with enough detail to choose whether to read Sistersong or not, and to be prepared if you do for what is included.

“I Am Unapologetically Me” – My Affirmation for 2022

Introducing M.E. Friends - a monthly zoom call for those affected by M.E.