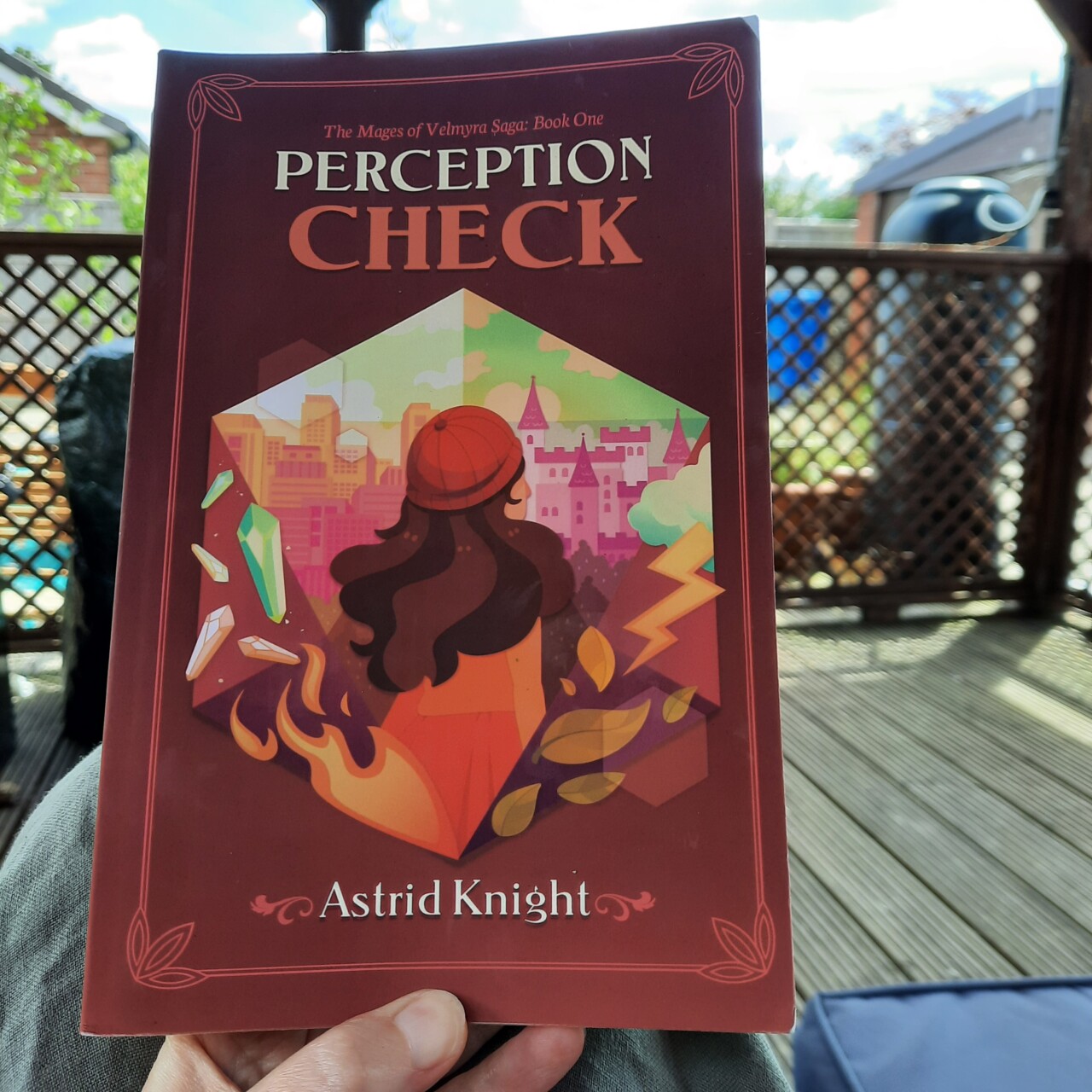 Where do I start with Perception Check? It’s an adventure novel, based around a tabletop roleplaying game not dissimilar to Dungeons and Dragons. Except in this book the world of the game is real, and it has passed over into our world, leaving its mark on our group of unlikely heroes who take on a quest to get back what once was lost. So we spend part of the book in our world, and part of it in a fantasy realm, where magic is real, and the stakes couldn’t be higher. And all the while the characters are dealing with backstories full of trauma and regret and lies. What could possibly go wrong?

It all revolves around May…

Perception Check starts with the most ominous of beginnings, “I see the demon sitting on the bus before it sees me.” Getting right into the action, huh? Except it becomes abundantly clear very quickly that all is not as it seems. Only Violet, the main character, seems aware of the demon, and it soon disappears. That is when we start to hear about her backstory, the one in which as a teenager she and her friend May snuck out one night and were attacked by demons, with May being dragged through a portal and lost forever.

You see where I’m going with this, don’t you? The portal led to the other world, the one from the game, the one that our heroes head to. But we’re not quite there yet. We still need to find out that it’s real. Because for years of her life Violet has been told by everyone that what she saw wasn’t real, it was just her mind trying to make sense of something horrific that happened to her and her friend. I told you the characters’ backstories were full of trauma!

But suddenly, for whatever reason, the two worlds merge in places – and Violet’s best friend Eddie, the one who has stuck with her throughout all the years, finally sees what she sees too. And thus begins their quest. Their quest to bring May home. Because Violet knows she’s in Velmyra, the world of the game that Eddie loves to play – she’s seen her in the game master’s guide. Someone knows she’s there, because someone added her to the game.

A vibrant and diverse cast of characters

I don’t want to write any more because it would spoil the story for you, and believe me it is such an incredible story! So let me move on to telling you about the characters.

We’ve already talked a little bit about Violet – she’s gone through an awful lot in her life and understandably struggles with severe anxiety and panic attacks. As someone who struggles with anxiety myself, I really appreciated seeing a main character with this, and Astrid has written it into the story so well. Violet is someone who struggles a lot, but also leads with so much strength and conviction in her quest to rescue May. There’s even a point when she shouts at Eddie in frustration that she doesn’t need a knight in shining armour, and I love that about her.

Speaking of Eddie, he has his own issues to contend with. But often he’s the one providing the comic relief. Like when he launches into a rendition of Rasputin by Boney M when their non-human companions in Velmyra ask for stories from Earth around the campfire one night. He’s also Violet’s best friend, and I absolutely adore their deeply loving, yet platonic relationship throughout the book. Yes it gets strained in places. But they’ve been through so much together and you know they have each other’s back.

Jackson is the third and final human in the group. He’s a transgender friend of Eddie’s who comes along to his game nights most Fridays, but really doesn’t like Violet at all. It takes most of the book for you to find out why. They develop a sort of truce in order to go and rescue May, but it is definitely strained. Jackson is a bit of a mystery. You can tell he cares, but he’s holding something back. He’s also holding back from being the hero everyone seems to want him to be…

Adrian is the one who co-wrote The Mages of Velmyra game and put May in it. He’s the only one from that world who has ever met her, and the only one who has also travelled to Earth. When Violet and Eddie first track him down he is very dismissive and wants nothing to do with their quest, so it is a surprise when he suddenly decides to tag along. He and Eddie have a challenging relationship, with neither really trusting the other. Which puts Violet in a difficult position as Adrian begins spending time teaching her new skills in Velmyra. Like Jackson, Adrian is holding something back. But unlike Jackson, his intentions are not as obvious.

Kai the Calamitous is a non binary kindred folk who is always found with Gren the Gentle, a troll. The pair are quite literally inseparable, which is why I’m writing about them together. We first meet them in a less than fortuitous manner. But they end up becoming part of the questing party on the search for May, and over time we get to know more about them and they really do grow on you. For all Kai’s grumbling about various things along the way, they fight hard to make the quest a success. And they had me absolutely howling before their final battle when they came out with this:

“You happy? I’m resigning myself to being roasted like a pork cutlet because of you shits and your lost friend. Bet she’s just as much of a tosser as you all are. This better be bloody worth it, or so help me gods, I will haunt everyone you have ever loved. I don’t care if they’re in Velmyra or whatever other alien planet you hail from. Mark my words!”

But what I love most about Kai and Gren is their relationship. You can tell they’ve also been through a lot together, and they just get each other. Gren communicates mostly in guttural grunts and snorts that Kai translates for the others in the party. And when they fight, Kai is always atop Gren’s shoulders, out of harms way. It’s very hard to imagine one without the other.

Finally there is Melandrich, the leader of the questing party, appointed to this position by the Queen (you’ll need to read the book to find out how and why that happens – I don’t want to give away too many spoilers!) He is a very reserved, somewhat stoic, and very calming presence within the group. But when he gets angry, and he does, you know it.

A beautifully balanced book, filled with action and emotion

What I loved most about this book is the way that everything comes together so seamlessly. The characters I just listed balance each other perfectly. There isn’t one character that takes centre stage with others that disappear into the background, getting lost in the action. They all get their own chance to shine, their own opportunity to share both their strengths and their weaknesses.

And that’s another thing that makes this book so special, the fact that Astrid doesn’t shy away from the tough stuff. Within its pages they explore the grief of loss, the helplessness of not being able to help a friend in need, the sheer desperation of wanting someone to believe you, of wanting to believe in yourself, and the darkness of losing all hope altogether and becoming suicidal. There’s the regret of things said in anger, the guilt of things done to survive, or maybe something even darker…

Plus, Astrid talks about the things lots of fantasy writers often gloss over, like the fact that you wouldn’t have any shampoo and that some people menstruate. I’ve only ever seen one other fantasy writer include characters having periods, and it is so affirming to see, because I know if I ever ended up travelling for weeks or months on end through the woods it would most definitely be a sore point for me.

Once you start reading, you won’t want to stop!

I actually received an Advanced Reader Copy of Perception Check and am gutted that a string of health issues stopped me from finishing it in time to write this review before it was released. However once I had a good health day, I read the second half of this book in just one day! To put that into perspective I’ve been averaging around one book per month this year with all my health issues. Believe me you’re going to want to read this book, and once you get started you aren’t going to want to put it down.

And don’t worry if you don’t know anything about roleplaying games, neither did I. The premise is clear enough, and everything is explained throughout the book, so you can follow the story no problem. So, what are you waiting for? Go grab your copy of Perception Check now.

I thought I was straight until my partner came out

Introducing M.E. Friends - a monthly zoom call for those affected by M.E.