AD | Review of Her Majesty’s Royal Coven by Juno Dawson 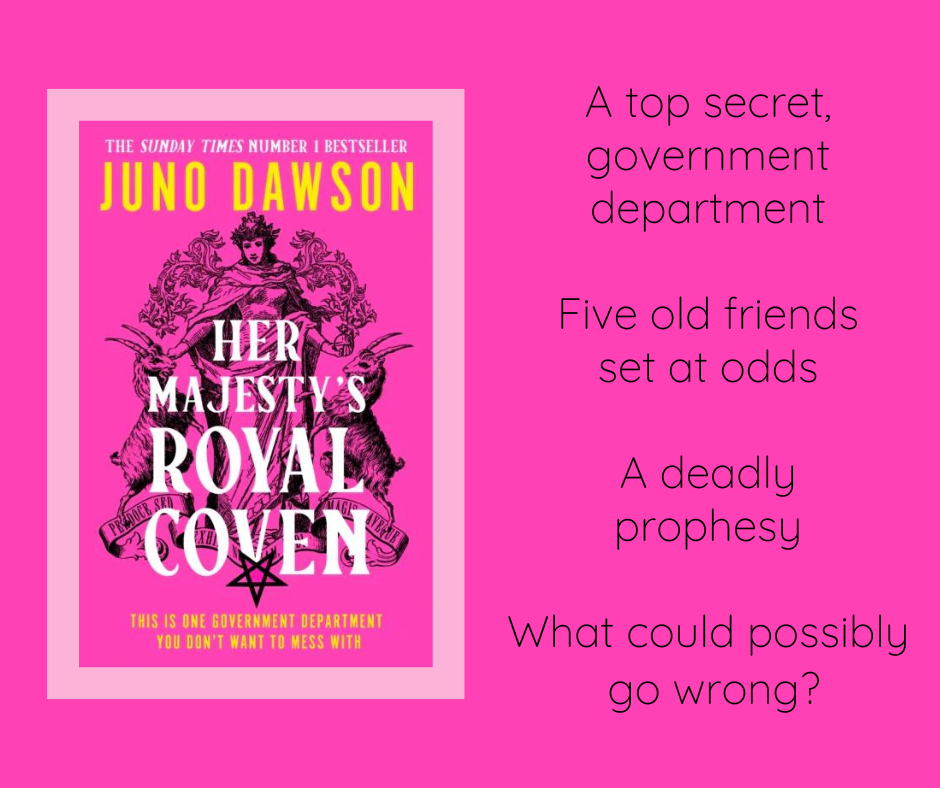 Disclaimer: I was provided a copy of Her Majesty’s Royal Coven by Netgalley, in return for an honest review.

When I first heard about Her Majesty’s Royal Coven, I was immediately intrigued by the concept. The story is based in the modern world, but revolves around a coven of witches that are part of a top secret governmental department. As a Pagan, any book that centres around magic in the real world will always catch my attention, and so I was excited to start reading this.

Before I get into the review, I want to make a note about the content warnings for this book. Juno Dawson doesn’t shy away from the tough stuff, and so you need to be aware of the kind of topics that come up. Storygraph has a very thorough list of content warnings submitted by readers of Her Majesty’s Royal Coven, and I checking it out. However for the purposes of this review I’m going to list some of the biggest ones.

So what is Her Majesty’s Royal Coven about?

The story begins with five teenage friends who are about to take an oath that will change their lives forever. They each have magical powers, however these are hidden from non-magical members of society. By joining the coven they promise to protect their country from magical forces that might threaten them.

The story then jumps forward many years, and the girls are now adults. We begin to learn how their lives have diverged as they grew up, with Helena now running HMRC (Her Majesty’s Royal Coven – this acronym gave me a great chuckle) as head priestess, Niamh using her powers to help with her work as a vet, Elle preferring to focus on her family (who do not know she is a witch), and Leonie who has set up what Helena perceives as a “rival coven”. The fifth girl from their original friendship group, Ciara, is also Niamh’s sister. But she is no longer a part of the group, having been incapacitated during “The War”.

The War of the past, and the threat in the future

It takes some time to really piece together what happened during the war, but we learn very early on that it has taken a massive toll on the magical community. Both Niamh and Helena lost loved ones during the war, a time in which it seems some witches and warlocks (the name given to male magical characters) worked with demons and caused unspeakable damage.

Though the war is now over, the trauma is great, and it bleeds into the way some of the characters react to a new threat that has been prophesised. All of the seers within HMRC are predicting that Leviathan, a great force for evil, will rise. And that the “sullied child” will bring about the destruction of both the coven and the world.

So when a young, powerful warlock is found, with powers beyond that which anyone has seen before, they automatically assume this is the sullied child.

The first time we see the sullied child, they are being held prisoner by HMRC. As a powerful sentient, Niamh is brought in by Helena to see if she can find anything out about the child. Niamh is horrified to see the conditions in which the child is being held, and gets Helena to agree to her taking them to her home where she can gain their trust. And this is when things really start to fall apart.

As Niamh starts to get to know the child, we learn their name is Theo. We also find out that they had some massive trauma in their past. And, over time, that they are trans.

Niamh believes that Theo should be brought into the coven as a witch, however Helena is determined to misgender her as male and uses every means at her disposal to get rid of the child she now sees as not only the sullied child but also a threat to all witches everywhere. Because within Helena we meet the epitome of a TERF.

Over the course of the book, Helena’s thoughts and actions become ever more desperate. Set against her old friends, all of whom are trying to help Niamh to help Theo, she uses her power to try to control events. She has Theo kidnapped by the warlocks, kills someone who could warn the others of her plans, and uses extremely dark magic to wield power over the other witches. And all the while she justifies her actions as “protecting” the coven.

Reading the chapters written from Helena’s point of view is hard. As someone married to a non binary transfeminine wife, I felt my anger rising constantly. I know that this is how transphobes think, having seen it play out so often on social media (particularly Twitter). And within Helena I found a character who summed up the extreme privilege, ignorance, and self-righteousness that hurts so many trans people today.

The only thing that kept me reading was the love and acceptance shown by the other characters, and their passion for justice. Niamh fights with everything she has to keep Theo safe. Leonie, who has already set up a more inclusive coven in Diaspora, introduces her to another trans witch. And Elle faces her fears of her family finding out who she is, in order to protect both her daughter and Theo. In these characters I found the fierce love that exists within the queer community and their allies.

Let’s not talk about the ending…

I have to admit I have a bone to pick with Juno Dawson. Having taken us through the most gut wrenching chapters, we near the end of the book thinking that everything is going to work out fine. And then… in the very last chapter the worst thing imaginable happens. I’m not going to spoil it for you, but just be warned that this book ends on a massive cliffhanger!

My overall impression of Her Majesty’s Royal Coven

I enjoyed reading this book, and am eager to read the next installment when it is published. It took several chapters to really get clear in my head which character was which, as the POVs kept changing. But once I had that clear in my head it was great to see how each character developed.

And as hard as I found all the conflict within the story, not just with Helen’s transphobia, but also how exclusive HMRC was and the way in which Diaspora was looked down upon, I’m glad it was included. Because this is exactly the kind of world we live in, with minorities having to fight constantly for acceptance and basic human rights.

I’d definitely recommend picking up this book if you’re interested in a story set in the real world, but with a secret, magical other world too.

You can buy Her Majesty’s Royal Coven by Juno Dawson at my favourite, independent bookshop Queer Lit.

If you’ve found this post helpful, here are some ways you can say thanks and support A Spiral Dance.

I'm so grateful my wife came out as trans!