Telling Our Only Child We Won’t Have Another Baby 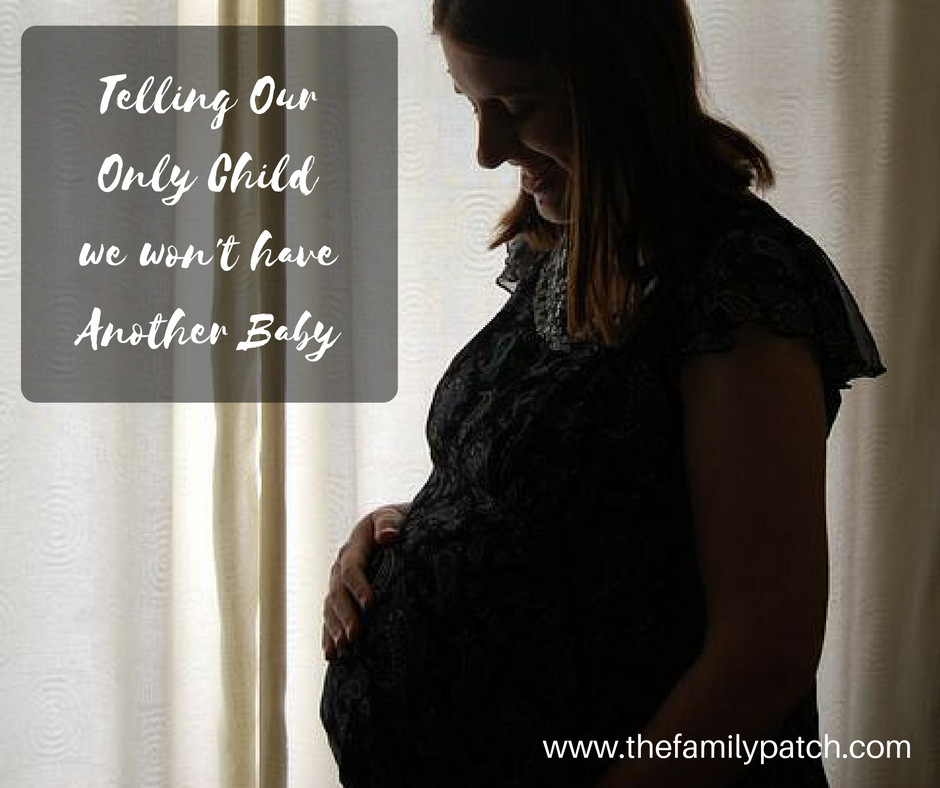 So, this blog post is quite a tough one for me to write. But it’s also one I knew I would probably have to write at some point. Little Man is an Only Child, which is something I’ve written about a fair bit in the past. But we’ve never really had to talk about it with him before. I mean, he’s only just turned 5, it’s not a conversation that naturally occurs with a young child. Until today. Today we had to tell him we won’t ever have another baby. And that was unbelievably hard.

It all started because we were watching Star Trek: Deep Space Nine (of all things). A character in the episode was giving birth and Little Man showed interest in what was happening. So TJ explained to him that babies grow in their mummy’s tummy and then mummy has to push them out. We’ve mentioned this in the past when talking about friends who were expecting, and we’ve even told him he grew in my tummy, but he never really questioned it before. So we didn’t really expect him to do so this time.

But just after the baby was born, he started telling us how cute the baby was. Again, this is nothing new – he often tells us how cute babies are whenever he sees one. (He does the same with kittens, but that’s another story!) But this time he seemed to fall into thoughtful silence. So I asked him, “do you think you’d like to be a daddy one day and have a baby?” And that’s when things got interesting.

Maybe a minute or two later he started pushing down on his belly towards his bottom and grimacing. I automatically asked him if his stomach hurt (as it was less than 24 hours since he had vomited with an upset stomach). But he said, “no mummy, I’m trying to push!” For a moment or two I had no idea what he meant, and then it suddenly dawned on me. “Are you trying to push a baby out of your belly?” The answer was a firm yes.

I didn’t know whether to laugh or cry, it was one of those moments! My heart practically exploded at the adorable nature of his innocent misunderstanding of what we had told him. I explained that only ladies could grow babies in their tummies and so even when he was grown up he wouldn’t have a baby himself. But he could still be a daddy one day if he wanted to be. And I hoped that might end his confusion. Except I don’t think it was mere confusion, he really did seem to want a baby.

He started trying to pull my top undone to get to my belly, so he could push on that. So I had to explain to him that mummy doesn’t have a baby in her tummy. At which point I think my heart broke in two. As hard as it was for TJ and myself to decide never to have another baby, I always knew there might come a day when Little Man would show an interest in a brother or sister. And I knew it would be difficult to explain why we’d chosen that, not because it was the wrong choice but rather because it was a choice I desperately wish we’d never had to make.

I’d have loved nothing more than to be able to tell Little Man that mummy doesn’t have a baby in her tummy right now but one day she might. But I couldn’t. I had to explain to him that we won’t ever have another baby growing in mummy’s tummy. Only he got to grow in there when he was a baby. He turned to TJ and asked if he had a baby in his tummy, making us explain once again only ladies get to do that. She he turned back to me and said, “maybe there’s a tiny baby!” I told him I was sorry, but no there wasn’t even a tiny baby in there. “Maybe, as tiny as an ant!” he replied. Oh, my poor, broken heart!

There are many, many times when I wish things could have been different. When I see how much Little Man adores playing with other kids at the park or seeing his cousins. When he tells me how cute babies are, or says, “I hear a baby” and looks around for them when we’re out and about. And also when he takes such wonderful care of the numerous teddies and soft toys he takes to bed with him. He hates being alone, in fact his standard response when he can’t sleep or wakes in the night is “I’m lonely”. I wish, more than anything else, we could have expanded our family as I’m sure he’d have loved it.

But we can’t. It’s just not an option for us. It never was. But even in those early days I clung on to the idea that maybe one day we could still foster. I thought if Little Man showed an interest and seemed able to cope with the demands fostering puts on a family, maybe we could do it. But the reality is that I’m too sick to do that. It really is just going to be our little family of three.

And in many ways that’s alright. I love the dynamic we have and the fact that Little Man can have as much attention as he craves. Although, actually, he craves a LOT of attention – because he doesn’t like being alone, remember – so I’m not sure he’d agree he gets as much as he wants! But the point is, he has us all to himself. We’re busy parents, working and balancing our many health issues, and so we don’t have a lot of time and energy to spare. What we do have is all his. And that works for us.

So, yes, my heart feels fragile tonight. This whole thing has reminded me just how much my health has robbed from us, both in terms of not being able to have another baby and in terms of not even being able to think about fostering. But there’s nothing I can do about that. So I’m choosing to see the beauty in Little Man’s hope and interest in us having a baby as something we can cherish, even if we can’t make it come true for him. Because, if nothing else, it shows he is growing into a very loving little boy.

Baking with a Toddler for the Very First Time!

Introducing the Idea of God to Children