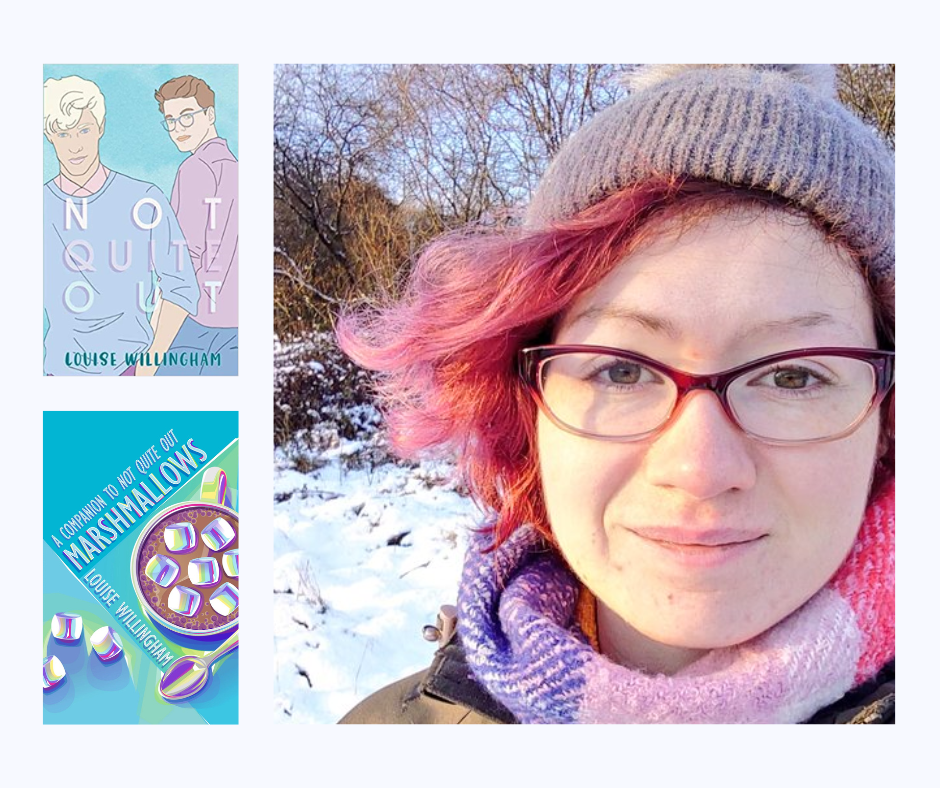 Welcome to this new series on the blog – Author Q&A. As an avid reader and author, I have been lucky enough to get to know a lot of amazing writers via social media. And I wanted to be able to share their work and experiences with you all. Hence the Q&A format. We’re kicking this series off with one of my favourite indie authors – Louise Willingham – who I’m sure many of you will recognise from my reviews of their books.

Can you tell me a bit about yourself?

I’m a nerd living in Staffordshire, UK, with interests in cats, death, and crochet.

What made you want to become a writer? Have you always wanted to write, or is it something that developed over time?

I’m lucky to be surrounded by stories. Whenever I stayed at my grandparents’ as a child, my Grandad would tell me a bedtime story which he based on Tales of the Riverbank but made into his own. My parents would read or make up stories if I couldn’t sleep. I loved creative writing sessions at primary school, and remember my teacher writing “you really should be a writer some day!” across the bottom of one of my short stories. I’d never seriously considered becoming an author — I always planned on being a scientist — but I never wrote it off, either.

What do you enjoy most about writing?

I’m selfish: I like writing things I want to read. I find characters and moments, write them until they read like I imagine they should, and eventually share them with a select bunch of trusted friends. But the fun bit for me is being able to revisit ideas and read scenes that I’m proud of.

What do you enjoy least?

Sharing my writing! Ironic, yes. But ever-true. I don’t fear criticism; I fear being perceived. There – how deep and depressing of me!

How has your writing developed over time?

Allowing myself to write in first person present tense changed everything. Characters are always my strength, so why was I so afraid to narrate as the character? I’m not sure, but I’m glad I embraced first person.

Whose writing never fails to inspire you?

Rue Sparks is one of my very favourite authors. I re-read their debut novella, Daylight Chasers, at least once each year! Deke Moulton is another author who consistently blows my mind. I had the honour of beta-reading their debut novel, Don’t Want to be Your Monster, and I utterly adore it.

Amanda’s note: you can find my reviews of Not Quite Out here and Marshmallows here.

Let’s talk about Not Quite Out. What was the inspiration for it?

Will meeting Dan in the Students’ Union started when I found a news article about a doctor being refused medical insurance because he was taking PrEP. I already had these characters in some exploratory writing, but I thought how Will — my closeted, awkward, med-student — would react to seeing such an article. I wrote his reaction and the book went from there!

What did the writing process look like for NQO?

So incredibly messy. I already had hundreds of thousands of words written for Will and Dan, but none of them were books. I didn’t consider publishing until I was about… 10 drafts into what I was calling Uni Will. This is probably because I don’t plot: I write an idea, chase that idea as far as my knowledge of the characters will take me, and only stop when I realise I have a better idea for how one of the scenes I’ve already written should have gone. I rewrote NQO more times than I’d like to admit, but here’s a screenshot of part of the folder where all these abandoned drafts live.

What are you most proud about in this book?

Two years after it published, I have to say: the short chapters. I really love how short the chapters are. It’s a quick, easy read — even though the content is ‘rainy’.

Do you have a favourite character?

Daniel is my forever-favourite. He’s an amalgamation of so many people who I love and there’s something reassuring about him. He can do it. You can do it.

(This is my very favourite piece of art: Rue drew it! Isn’t it perfect?)

Do you have a favourite scene?

I do! And it’s not a huge spoiler: it’s the scene where Dan turns up at the LGBT social and says “You look tense” — I love it because it’s Dan taking the lead. It’s Dan being vulnerable and brave. Dan is confident and safe — the safest he’s been the whole time we’ve known him in the book — and Will is completely smitten.

How did you decide on the publishing process you took?

Awful. Can I say that?

Note from Amanda – YES you can!

You’re about to run a Kickstarter to enable you to produce an audiobook version of Not Quite Out. What was the thought process behind this?

I love audiobooks. I wanted NQO to be an audiobook right from the start, but circumstances didn’t allow for it. Things changed! I saw an opportunity and I took it. I spoke to other authors who have had audiobooks produced, decided on the best route for me, and reached out to a few narrators. Rowan is absolutely perfect for Will — more perfect than I dared to hope for — and all of a sudden I was making an audiobook!

What do you want people to know about the Kickstarter?

The incentives are going to be hugely fun, but mostly I’m excited for everyone to get to hear Will. Rowan perfectly captures Will’s anxieties and over-dramatic tendencies.

I’m going to offer a super-exclusive mini-book as one of the Kickstarter incentives. This will be a small paperback which will be unavailable to buy but will be a short story covering the end of NQO from Lilley’s perspective – when she and [redacted] finally [redacted].

There’s also a short story included in the incentives, isn’t there?

I’m releasing one more piece of exclusive story with the Kickstarter: an epilogue ebook! This takes place at Halloween, a while after Marshmallows, and I don’t want to say much more except: Lilley knows everything and Will knows nothing.

Speaking of Marshmallows, can you tell us a little about that?

With Marshmallows, I had an opportunity to extend the ending of NQO. I was actually going to self-publish it and worked with an editor, then spoke to Rue Sparks (favourite author AND artist: they are talented!) about the cover. Then, Lost Boys Press contacted me. We agreed to work together on the novella, worked on edits and promotion together, and here we are!

How did it feel carrying on the story and seeing how all the characters were getting on after the end of the book?

The main thing you should know is I haven’t stopped writing for Will since I first started back in… 2014, I think. I’ve written multiple different possibilities for each of the characters, but it was an absolute joy to be able to share the first few days of Dan and Will settling into this new status as boyfriends.

Are there any other stories you’d like to tell within the NQO universe?

What about other stories you’re working on? Can you tell us a bit about those?

Will stands out as my only main character who is set in the contemporary, ‘real’ world and who is not asexual. The book I’m most in love with at the moment — which I’m lovingly referring to as DeadWIP — features an asexual main character who is dealing very poorly with grief when he accidentally resurrects two cadavers. Oops!

What made you want to tell those stories?

I’ve always had a more-than-average interest in death, especially forensics. Someone close to my family died towards the end of 2020 and I found comfort by learning more about the funeral and death industries. Since then, I’ve spent a lot of time writing characters who reject or embrace loss. I find it cathartic, but more than that: these stories feel important and real.

Where to find Lou and her work

If this Q&A with Lou has interested you in her work, you can find both Not Quite Out and Marshmallows at the links included. Lou also has a website and can be found on both Twitter and Instagram.

And you can sign up to the audiobook Kickstarter here. It launches on 9th February 2023, and if you sign up now you will get a notification when it goes live.

With a huge thanks to Lou for taking the time to answer my questions and share her experiences with us all.

Review of One Of Us Has To Go by Katja Schulz