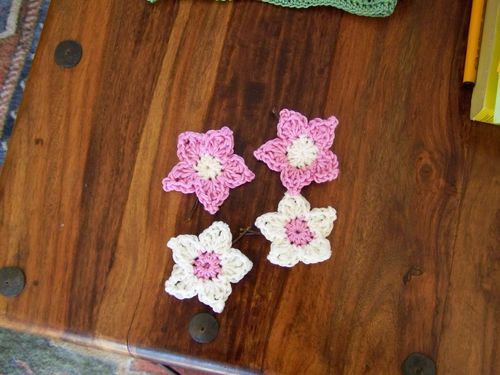 My crochet fest continued this weekend as I found myself rushing to complete a last-minute project idea in time for our niece’s birthday party. I had spent Thursday evening making her a little pink and white bag as a little gift, following this pattern on Ravelry.

I have to say that either my tension is completely out or I just misjudged my choice of yarn and crochet hook, as my end product turned out a lot shallower than the photo shown with the pattern. Not that it mattered much, as the bag looked good enough as it was, but I really do need to work on my pattern-reading skills!

This became even clearer to me as I spent Saturday evening and Sunday morning desperately trying to finish 5 crowns for 5 different aged children between 11 and 1 years of age. As soon as I found out the party’s theme was “princesses and princes” I just knew I had to have a go, but I did give myself quite a task. I didn’t have the time to properly work out the sizes and actually started, undid and restarted the birthday’s girl’s crown several times and still think it ended up a little bit too small. But at least I finished them… what do you think?

They were far from perfect, but I had fun making them and learnt a lot about sizing and altering patterns by doing it. I just needed a bit more time than I had allowed myself.

The patterns I used were also from Ravely, with the first crown being made to this pattern (using the same number of stitches but a larger hook) and the others were made following this pattern (using the same sized hook but eventually cutting the initial number of stitches in the chain down to 77 instead of 110, which is why I think my tension must be rather off as the original pattern was supposed to fit a 12-18 month old but my version was too big even for me! Or perhaps it was because I used DK yarn, which is larger than sport weight… I have a lot to learn.)

I also made these sweet little flowers to attach to hair slides for the ladies going to the party. They are super quick and easy and come from one of my favourite crochet bloggers and designers, Alice of Crochet With Raymond. The pattern can be found here and uses one of my favourite crochet tricks, the Magic Ring. Before I read about this technique for starting a circle, I always ended up with a gaping hole at the centre of my work, but no more! I love the things I am learning about crochet these days and am finding it very therapeutic to just sit and create things right now.

Sitting on the sofa crocheting away whilst Tim watches a film or plays on his xBox is so much fun as I can be in his company without becoming bored or distracting him from what he is doing. And doing this at the weekend, putting together things for a birthday party, made me think of how many times I might do that over the coming years as I get an idea and try to make it into reality for our son’s enjoyment. I see many crowns, capes, and fancy dress items in my future at this rate: what fun!

I haven’t done any crochet since Sunday, thanks to the intense heat we’ve been experiencing. At 27 weeks pregnant, I am finding it more difficult to breathe, move and simply keep going and the added heat just completely wiped me out. I couldn’t even sit and watch tv I was so hot, and spent a lot of time with my feet in a bathfull of cold water, which is not a great place to crochet! But I have plans for this coming weekend and I shall share more with you next week.

Adventures of a Novice Sewer – Floor Pillows by Coats Crafts