Getting Stuck in Fight or Flight 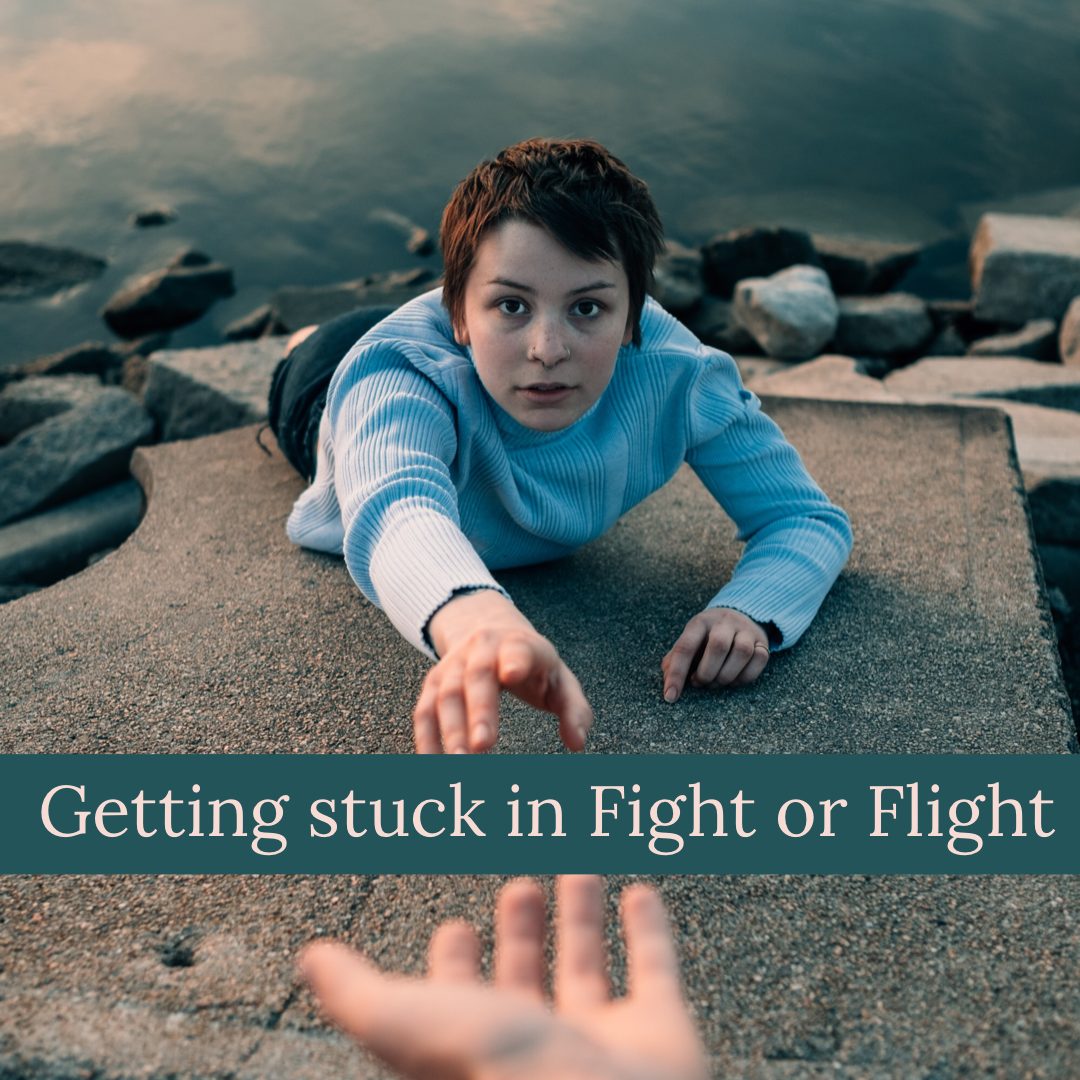 I had an interesting session with my herbalist today, and I wanted to note down my thoughts about it and how it makes me feel, before I forget. So please excuse if this post is a bit rambling in nature.

As I may have mentioned on here before, I’ve been seeing the Herbal Medicine team at my local college for a couple of years now. I get access to the appointments for free as the students use them as part of their training. All I have to pay for is the medicine itself, making it possible for me to see them regularly and take a more holistic approach to my health.

It’s been a while since my last session, as I totally forgot about the one we’d scheduled during the Summer holidays. (Let’s not mention the one I booked for Monday and totally forgot about too – I have no idea where my brain is at right now. I was mortified!) Anyway I saw them again today for the first time, and we reflected on how it had felt like we were making progress on an emotional level, but physically I am really struggling.

I happened to mention that I feel as if I’m constantly living in fight or flight mode, and that when I “crash” after doing something it’s as if I need to rest but my body is still fighting itself (hence the pounding heart, intense awareness of my entire body, as if I can feel the whole of my digestive system in a very uncomfortable way etc). I know that people with EDS can get heightened responses to situations that cause the fight or flight response, and it feels like my body has got stuck in a pattern it cannot seem to get out of.

The student currently in charge of my sessions (there’s also a supervisor and several other students watching the session) agreed with me, and said she’d actually planned to talk to me about it today. I love it when my intuition coincides with what they’re seeing in my symptoms too. It reminds me that I do know my body and mind well, I just have to remember and trust in my ability to heal.

The impact of chronic stress on health

We all know the fight or flight response, right? It is super important in helping us deal with stressful situations short term. But when chronic stress creates a longer-term activation of this response, it can have a significant impact on your overall health. As this article says:

“The long-term activation of the stress-response system and the overexposure to cortisol and other stress hormones that follows can disrupt almost all your body’s processes. This puts you at increased risk of many health problems, including:

I have all but a couple of those things (no weight gain, no heart disease). And it makes so much sense when I look back at the development of my health issues.

In 2014 I was feeling the impact of my work significantly, to the point that I could not eat or sleep by the end of the year and went to the doctor thinking I was about to have a nervous breakdown. It was messy and ugly and made me question myself more than I can say. I still feel a panic response when thinking about it. So it’s probably no wonder that 2014 was the year my digestive issues began to become massively problematic. I would also drag myself on the walk to Oscar’s nursery, in tears, as I didn’t know how I was putting one foot in front of the other at times. The fatigue was beginning to creep in back then, although only on physical exertion and not constantly as it is today.

2015 then brought with it redundancy, relocation, 2 different jobs, and Tim’s first suicidal episode, amongst other things. That was the year I began having migraines again, first for 3 days at a time and gradually increasing in length. I also started having trouble I thought was related to my Endometriosis, so ended the year with surgery that was challenging to recover from. The year that I had hoped would be my recovery from the hell of 2014 actually just added many more layers to the stress I had thought I’d escaped.

And then 2016 was the year it all fell apart. Or rather I finally fell apart. My anxiety rose so high that I had a panic attack the night before an exciting trip to London with Little Man . I was working 3 days a week and spending the rest of the week feeling such intense fatigue and other symptoms it felt like I had the flu. By the Summer I had been signed off work, because standing on your feet all day in a furniture store, when you’re immensely fatigued and unsteady on your feet, isn’t possible. But instead of accepting my limitations, I started doing more freelance work, planning to overcome this “blip” by pushing through it. Talk about deluding yourself!

I continued working with a variety of clients throughout 2017, often working from my “sick bed”, always planning lengthy deadlines to give me plenty of leeway for working on my better days. But by the end of that year I was unable to continue working at all. My client work had dwindled to a minimum, and so when my final client chose to work with someone else I accepted it was time to give in. Even the DWP agreed with this at my assessment at the beginning of 2018, and put me in the Support Group for ESA, meaning they didn’t expect me to be working towards returning to work.

But the stress continued. Over the past 18 months Tim and I have had to fight the DWP on 3 counts (one successful tribunal, still waiting for both our PIP tribunal dates). We’ve had constant financial stress because we couldn’t access disability benefits we really need to help make our lives a little easier. There have been several losses in our extended family, and two of my uncles have cancer. We had to deal with a landlord whose refusal to act in a timely manner left us with a dining room was a massive damp patch on the wall and a living room with a ceiling that caved in due to water damage. And we moved again (which, whilst a positive, was still stressful!)

Within all of that, Little Man started school, was diagnosed with Autism, and we’ve just applied for an EHCP for him. His school have been great with him and us, but it is still a worry. As is keeping him safe when he seemingly has no concept of danger, nor personal space, meaning you constantly have to be alert and aware of what he is doing, and cannot shut off even when resting in another room. I love him dearly and wouldn’t want him any other way, but my poor heart rate jumps multiple times a day in response to my parenting role with him!

So, you see, it really does make a lot of sense to me that after several years of pretty intense and consistent stress (consistent as in one thing after another, not consistent as in from the same source), my body could have become “stuck” in this fight or flight response.

Healing from the effects of Chronic Stress

I was actually told today that it’s as if my body has gone beyond fight or flight and is just constantly “prepared to fight/flee”. We talked about how even getting back to a more “normal” fight or flight response would be an improvement, and it may be gradual. But it is doable. I need to find (or create) a space that feels “safe” to me, so that I can go there and begin to associate it with feeling safe. And we’ve changed my herbal tincture to some drops under the tongue, to try and help soothe my body whilst bypassing the digestive system that is so upset at the moment.

I feel so lucky to be supported by such a wonderful team, who always listen to what I’m experiencing and encourage me to trust my own instincts when it comes to these things. Because so often we put all our trust into medical professionals and forget that we are a part of our healing team too. And I’m so grateful that I have access to healing herbs, that have been specifically tailored to my needs and won’t cause issues with my other medications (I would feel completely out of my depth if I tried to simply buy herbs or supplements from a health food shop).

If you want to know more about the healing power of herbs, check out this video that one of the students who previously led my care sent me. It’s only a short talk, but it covers a fair bit.

And if you have any suggestions for creating a “safe space” or recommendations of books you’ve read or meditations you’ve done to ease anxiety, please do let me know in the comments below.

Get Your Kids To Eat Anything | Book Review & Free Recipe