Review of Autoboyography by Christina Lauren 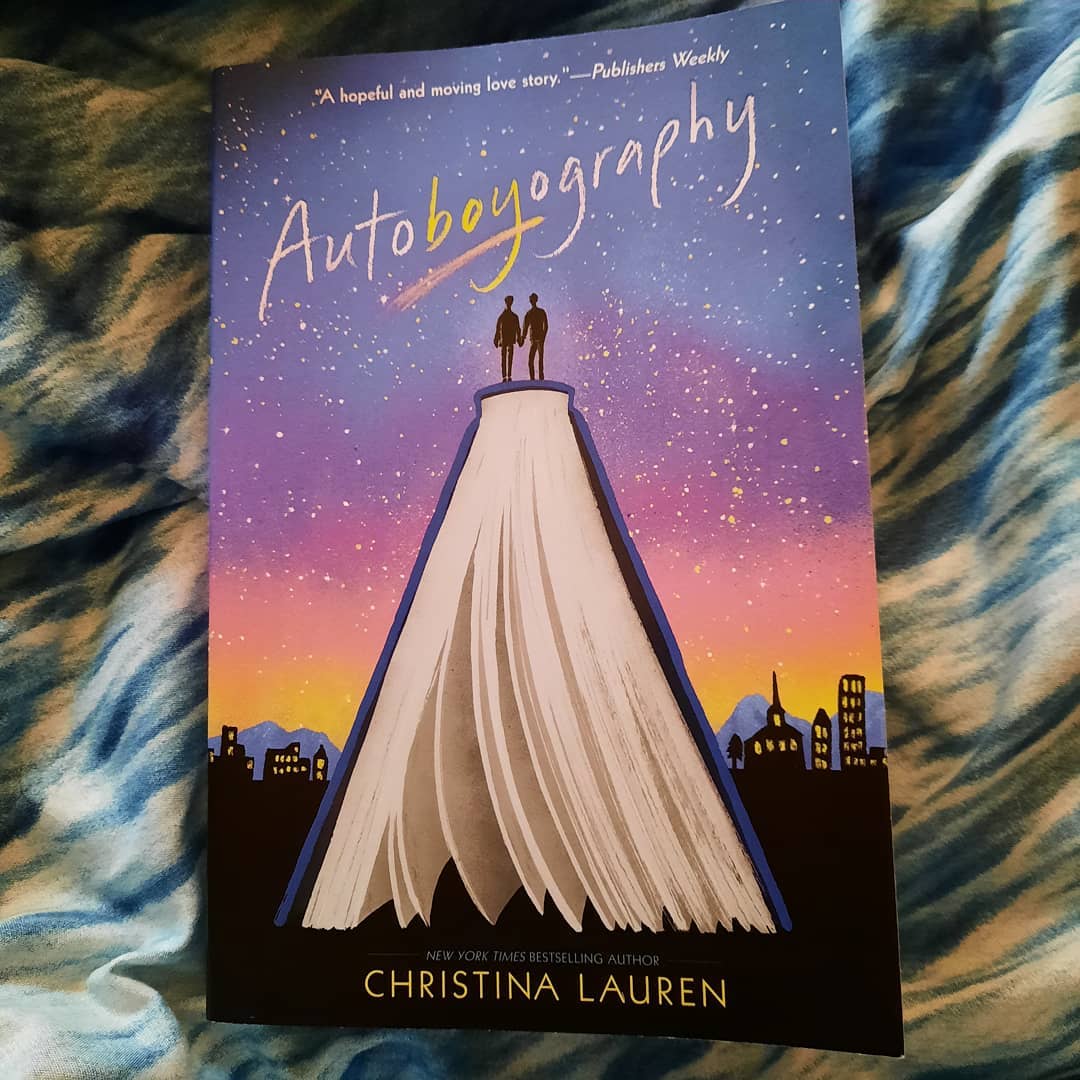 This book. Oh, how I love this book so much. It is a completely beautiful, but utterly heart-wrenching love story between 2 boys. Tanner is a bisexual teen with amazingly supportive (but very protective, given where they live) parents. And Sebastian is a gay Mormon, the son of a Bishop no less, who cannot embrace who he is without serious consequences with his family. Autoboyography is sweet and tender and an utter joy to read. But it is also filled with so much pain and anger for what Sebastian has to go through, and how much it hurts both him and Tanner. And I hope to do it justice in this blog review.

Autoboyography – the clue is in the name

This book is written from Tanner’s point of view and begins as he and his best friend Autumn discuss classes for their final year at high school. One of the classes they are going to take is called The Seminar and is basically a book writing course. Tanner isn’t really interested in the class at first, but Autumn persuades him to join her in it and his whole attitude to the class changes the moment Sebastian walks in. Sebastian took the course the previous year and his novel was so good that it is being published, so the teacher – Mr Fujita – has asked him to come back and help this year’s students. As soon as Tanner meets Sebastian’s eyes he is hooked, and as he spends more time with Sebastian (due to needing a bit of help getting going with his project) he finds the words pouring out of him. His book is pretty much the book we’re reading – Autoboyography is the story of Tanner and Sebastian told, mostly, by Tanner.

I say mostly, because near the end of the book the narrative changes and not only do we see things from Sebastian’s perspective, there is also a shift from 1st person to 3rd person. There was a moment when this happened that I suddenly stopped and wondered what was going on. But it was so clever, because at that time Tanner and Sebastian were separated from each other. Only when they are reunited at the end of the book does it return to Tanner’s 1st person narrative again. So as you read the book about Tanner writing a book, you get to actually read his book. Tell me that doesn’t just blow your mind slightly.

It’s a story of forbidden love

As you may have gathered from the introduction to this review, Tanner and Sebastian’s love story is not an easy one. Sebastian is the son of a Bishop within the Church of Jesus Christ of Latter-day Saints. Not only this, they live in the city of Provo in Utah, whose population is mostly Mormon. As a result of this, Sebastian’s whole life is pretty much completely tied up in the church – he attends multiple church events, studies at Brigham Young University, and is due to go on his two year Mission as soon as the promotion tour for his book is over. So when it turns out that he is attracted to other guys, particularly Tanner, there is a real conflict he has to overcome.

We learn, over the course of the book, that within his church homosexuality is still seen as against God’s plan. And whilst the church seems to have moved on from outright condemnation of homosexual attraction, it still does not accept anyone acting upon this attraction. You might be expecting this to mean that the book spends a lot of time with Sebastian fighting his attraction to Tanner, but this really isn’t the case. Tanner and Sebastian have their first kiss fairly early on in the book, and several times Sebastian confides to Tanner that every time he has prayed about his attraction he has felt God’s approval. His conflict is not with his faith, but rather with his church.

That being said, he still isn’t able to say the words, “I’m gay” for most of the book. There’s a heart breaking part about halfway through the book where he and Tanner are talking about this, and it’s something that continues to play into the dynamic of their relationship throughout the book.

Pages 223-224 of Autoboyography by Christina Lauren.

Tanner is not Mormon, and you would think that this would make it easier for him. And it does in many ways. His parents are the most supportive they could be, but only behind closed doors. You see, Tanner’s mum was raised in the LDS church, but left it after her sister was excommunicated for being a lesbian. When the family made the decision to move from California to Utah when Tanner was 15, she made it abundantly clear how careful he needed to be about sharing his sexuality. Even Autumn, his closest friend, doesn’t know that he is bisexual. And when his parents find out about Sebastian, they are naturally concerned, not just for Tanner but also Sebastian. Tanner’s mum knows what it’s like to be torn from your family and doesn’t want either of them getting hurt. But it’s not exactly something she can protect them from.

I say this because I want you to be prepared for the rollercoaster of emotions this book will take you on. For all the beautifully sweet and delicious moments that you get between Sebastian and Tanner, there are just as many heart-wrenching moments. Tanner worries about what the future holds. Sebastian feels torn between his love for Tanner and his love for his family. They ease up, then get closer again, only to be ripped apart. Tanner fucks up in his distress and almost ruins his friendship with Autumn. And Sebastian barely saves Tanner from a failing grade in The Seminar as he cannot possibly hand in his book without outing him. It’s a wild ride, and if you’re anything like me you’ll find yourself taking deep breaths to calm your nerves more than once.

Thank goodness I had Lou*, who recommended the book to me, to reassure me halfway through the book that it would all be okay in the end. Because, honestly, there was a point where I was too afraid to keep reading. I wasn’t sure how much my heart could take with these sweet boys. But I’m here to reassure you that it has a perfect ending. Not a happily ever after. There’s no miraculous twist that enables them to be together without consequences. And I’m glad, because that would do the story a huge injustice. But they do end up together. And that’s what matters. I know I can leave these boys to face whatever lies ahead of them together, because they have each other.

*Incidentally, Lou wrote Not Quite Out, which I have written about here. If you love the dynamic between Tanner and Sebastian, you will love Will and Dan too.

Why this book was so important to me.

As a Christian whose partner is Non-Binary Trans Feminine (and who is realising she was never really straight herself), this book hit me hard. We have been unbelievably supported by our church since Thea came out, but I know that is far from the norm. Too many people face the decision between openly being who they are and being a member of their church. And it utterly breaks my heart. I could go on all day about how Christianity is, at its heart, a path of love and acceptance of all whilst protesting against the domination systems that tell us some people aren’t worthy. But I don’t want to do this here. I’ll most likely write a post with more on this at a later point, but for now you can read a little bit about it in this post.

What I want to say in relation to this book is how much I loved Sebastian’s connection to his faith. His faith never wavered. Not once did he question whether he was loved by the God he believed in. And that’s the point really to all of this – it isn’t the faith that is the problem, it’s the institutions and dogma that deny the beautiful existence of all human beings. Sebastian wasn’t accepted by his church or those who followed the teaching of the church. And that included his family. I honestly cannot tell you how angry it made me reading the parts where his parents responded to his sexuality. Even a hypothetical question of, “what would happen if one of us was gay?” was met with stony silence for an entire week. I’ve had people pointedly ignore me for something I have said or done in the past, and let me tell you that silence hurts far more than words ever could. It’s like you’re not even worthy of a response. Oh, how my heart broke for Sebastian right then.

But silence doesn’t make the problem go away. Sebastian tries to push it down, but he can’t. He loves Tanner too much. He reads the words Tanner wrote in his book like a love letter to himself, that “shines a light into the dark, dusty corners of his self-loathing” (page 374 of Autoboyography). And eventually that love outweighs everything else, and the hurt of being away from Tanner is more than the hurt that he knows he will create by turning from the path set out for him by his church. Which is what love is all about, right? It isn’t easy. It’s often messy. And my word can it be painful as hell. But when you have the person you are meant to be with by your side, you’ll get through anything. As Tanner and Sebastian say at the very end of the book:

I want this burden, I thought. And maybe that’s what just happened. Maybe I earned it. I want to be at least partly responsible for showing him that what he might lose is outweighed by owning his life, completely.
“I’m not afraid of having some work ahead of us.”
“I’m not either.”

Page 403 of Autoboyography by Christina Lauren.

Get yourself a copy of Autoboyography

If you’d like to read Autoboyography yourself, I am going to recommend you go to my very favourite independent bookstore, Queer Lit. Queer Lit is run by Matthew, who is genuinely the kindest person. They are passionate about the work they do and the books they sell, and offer amazing customer service.

And if you’re not in the UK, please do see if you can find an independent LGBTQ+ owned bookstore where you live.

I’m so grateful my wife came out as trans!

I thought I was straight until my partner came out