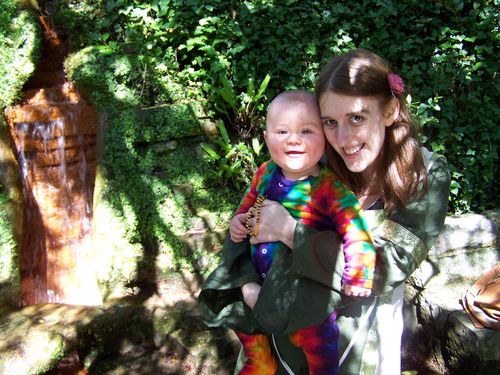 For the past ten years I have spent an awful lot of time thinking about where I fit in when it comes to faith, spirituality and indeed religion. It has been a rocky road because although I know what it is I believe, finding a name for that and thereby a way to express it has been challenging.

For many, many years I honestly believed that faith in God must equate to being a Christian. It sounds utterly naive now based on everything I have learned in the past ten years or so, but let me paint the picture. My family weren’t religious. They had beliefs, but we didn’t attend church or home groups or anything. My experience of religion was through school and the odd church service with Brownies, Guides or the few months I spent singing in my friend’s church choir.

So when I went to university, I automatically joined the Christian Union. And that was when it all got complicated…

I found myself in a place that didn’t feel right. Things that I had held dear were not only questioned but sometimes downright ridiculed and I went through a major spiritual crisis. I felt lost and alone and I didn’t want anything to do with that world.

Luckily I found support online through some spiritual (New Age) forums and began to open up again. I even decided to spend my three month stay in Germany not only volunteering with the Salvation Army but also staying with a family there too. And I had a wonderful time.

Those three months did a fine job of healing a lot of the hurt I had felt and broke down my defensive barriers because they taught me that what I had experienced previously was an extreme and not the norm. I felt happy and loved during those three months and still write to some of the officers every year as I remember my time there so fondly.

But however much that experience brought me back from a place of being hostile towards Christianity, it also left me more confused than ever. Conversations led to my realising that my beliefs weren’t always that far from those of what I’ll call “mainstream Christianity” for want of a better term, but I still had some major differences that I personally felt stopped me from connecting with the Christian community.

Things like “original sin”, “predestination”, and the concept of the “Trinity”.

Oh and the fact that I practise Reiki, believe Angels are sent from God to help us all, and that every living thing has a soul that survives beyond physical death.

It didn’t help that when I tried once more to connect with a Christian community online to try and figure this all out I was kicked off the forum for “saying the wrong thing”. Whoops!

You’d think I would have just given up and gone my merry way in the spiritual community that seemed to have no pre-requisites, right? But there remained a part of me that missed the connection that belonging to a “real life” community brings. And this only grew once I fell pregnant with Little Man and started to think about how I would raise him.

So when Tim started suggesting we should look again for some “Pagan” groups to join I initially felt rather excited.

Except, upon reading more I began to wonder if I really was fully Pagan either. It seemed as if I was somewhere in the middle, between liberal (perhaps very liberal) Christian and loosely Pagan, not really fitting in one world or the other.

Yet the week we spent in Glastonbury earlier this year brought home just how much I miss the community spirit of togetherness. We had a wonderful time celebrating Beltane, and we held a beautiful little blessing for Little Man in the Chalice Well Gardens…

So when Tim decided he really felt like Druidry might be where he felt his heart taking him, I listened with interest as he explained how some Druids consider themselves to be Christian as well and that the two don’t necessarily clash.

I don’t pretend to know all that much about Druidry as that is Tim’s area, not mine. But it did make me wonder just how that would work. So I looked for more information, reading bits here and there, and eventually coming across the term “Unitarian”.

It wasn’t a new term to me. Tim and I had actually been to a Unitarian church a couple of times, but for some reason I had never fully looked into it. And the more I read the more I realised I had probably been “Unitarian” all of my life, without really knowing.

Suddenly I felt less alone. I realised that there are groups out there that will help me as I develop further in my faith and that can offer support as I do the best I can in raising Little Man to seek his own relationship with God.

And with all the other changes I’ve been making lately I feel much more confident and secure in sharing this with him, and with others. Whereas before I would carefully write such things as “my faith has helped me through HG” or avoiding the subject altogether, I now want to share that as it is crucial to understanding some of the things I am going through. And whereas I often used to avoid joining in with people when they discussed a topic, I feel able to take part now.

I found this amazing resource this morning answering common questions about Unitarianism and I found myself nodding along with so many parts of it. But the thing that really made my heart sing was this:

“We favour a simple and inclusive definition of the word Christian. Thus a Christian is any person who seeks to live in accord with the life and teachings of Jesus, who identifies with what is best in the Christian tradition, and who, perhaps, sees in Jesus a revelation of the God who is immanent in all people. This is the wellspring of love that permeated his nature and his ministry.”

I never felt comfortable saying I was “Christian” but in actual fact I have a huge amount of love for the life that Jesus led. I want to be able to show Little Man the Bible as a part of his upbringing in a way that allows him to think about it and decide what he believes to be true in his own heart. Because I ultimately hope that Little Man will have the freedom and courage to explore various paths before choosing that which he experiences as bringing him into a closer relationship with God, however he understands God to be.

And that makes me feel glad.

As a family we can celebrate those things we all share in our beliefs and still celebrate those which are different. We can pray and read the Bible, but we can also meditate, celebrate the Wheel of the Year, plant a Sacred Grove, and be open to learning more about the faiths of others.

Oh baby boy… this is going to be such a wonderful journey for us all!

I totally understand that this post may not sit very well with some people. I am leaving comments open on this post as I am happy to discuss this with anyone who wants a mutually open conversation built on respect for differences as well as celebrating similarities.  But I am not open to comments that aim only to either end in a massive theological debate in a hope to “prove me wrong” or simply undermine my own relationship with God. I have had plenty of those in the past and this isn’t the time or place for it. Any such comments will be deleted. Thank you.