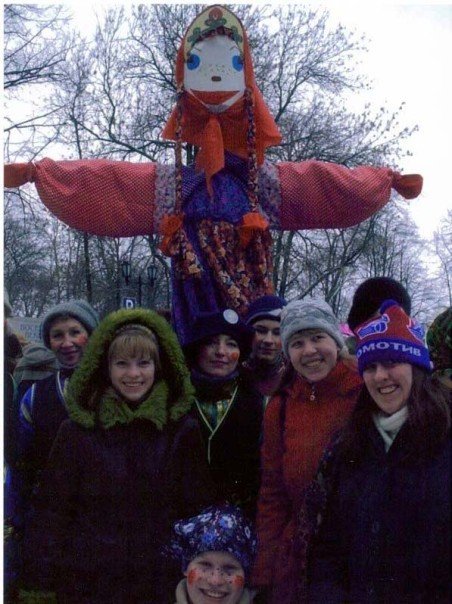 Recently I’ve been thinking a lot about how much I miss learning foreign languages. Just ten years ago I was in Russia, studying for three months as a part of my degree. I had only recently returned from three months working in Germany. And I’d taken a trip to Italy the summer before, with another trip to Switzerland the summer before that. And yet now, I barely speak a word in another language.

Celebrating Pancake Day with some new friends… to this day I still have no idea what the big puppet was about! Note my Lokomotiv supporters’ hat, I still have that.

My love of languages developed pretty much as soon as I was introduced to them. I was lucky in the respect that my secondary school was big on languages. In my first year I learnt Latin and French, and then from my second year I added German into the mix (with Latin being something I took voluntarily in my lunch breaks for a couple of years). I decided to drop French after GCSE to focus on German, but always regretted that decision as I forgot it so quickly. Whilst studying for my A Levels I had the odd class in Italian and Chinese (the latter being the most complicated language I have ever tried to learn!) and then ended up taking Russian, from scratch, at University. I think it’s safe to say that I love languages!

But I never really developed the confidence to just go out and speak the language. Despite developing a really keen ear for languages, meaning that I could understand the vague gist of other languages spoken around me (Spanish, Swedish, Polish etc) based on languages I had studied with similar roots, I just never had the confidence to make much of this skill. And over time what little confidence I once had has dwindled spectacularly.

But I really want that to change. I always promised myself that I would introduce languages from a young age to any children I had, and I feel like I am not really making the most of this opportunity with Little Man. We read some books in German, and we sing some foreign songs, but other than that we don’t really use the language in our everyday lives. And if there is one thing I have learnt about languages is that the key is most definitely in using them regularly and within and everyday context.

Thankfully, with the explosion of resources available online, it is far easier to reach foreign language resources now than it ever was when I was studying. Almost every day I hear some foreign language being played by Little Man, who is a dab hand at finding new things to watch on YouTube – and he never bats an eyelid when the video he chooses is in another language, which makes me even more determined to follow his lead and just start having a go!

So with that in mind, I thought I would share with you some of the foreign language learning resources I have discovered online so far, in case you wish to have a go yourselves.

The Bilingual Bookshop is an excellent UK based retailer of foreign language resources in multiple different languages. They currently have a massive sale on with 35% off using the code FB35 at the checkout.

Amazon have international sites where you can easily find books in a range of languages, direct from the country of origin. We’ve personally used the German site for books and resources. You can find a list of the different sites here.

I’ve heard about Flashsticks through various posts on social media, but have yet to give them a try myself. They are language learning post-it notes, using different colours to denote gender of words. I love the idea behind them (having cut out my own vocabularly words to stick around my house on many occasions!) because we are very visual creatures, and so these are bound to make language learning fun and easy.

YouTube is a goldmine for hearing languages spoken by natives. Let’s just think for a moment about all the bloggers and reviewers that we see on there, and then think about how many others are doing similar in their own native tongue! Little Man has stumbled upon some great kids’ reviewers in other languages and I love suddenly hearing Russian coming from the tab! But one of the things we have most loved about YouTube has been the channels made especially for children – one of our favourites is this Kinderlieder (German kids’ songs) channel.

I’m sure there are many more resources I have yet to find, but I hope that sharing these may have given you a few hints on where to begin if, like me, you want to include foreign languages into your everyday lives.

Tried and Tested: Cotton Yarns for Crochet and Knitting