The Reality of Life as a Spoonie 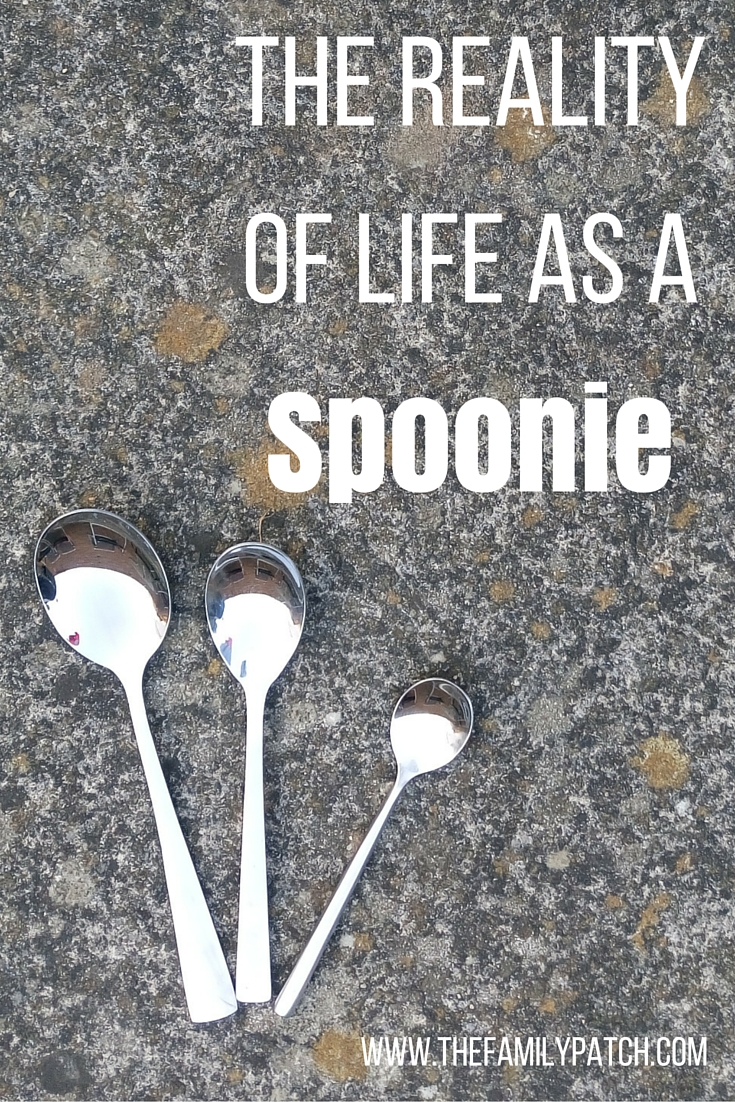 If you’ve been reading this blog for any length of time, I’m sure you know by now that my health has never been great. And if you’ve followed me on instagram lately, you will likely have noticed a big “healing” theme to my posts. But the truth is, I am more sick that I have ever been in my life right now and it has been really hard for me to accept that life as a spoonie really sucks sometimes.

I first came across the term “spoonie” in my early twenties, around the time of my Endometriosis diagnosis. And it felt like such a relief to realise there was an explanation for all I was feeling. I had struggled to keep up with people for years, spent most of my University evenings staying in and getting an early night whilst my friends went clubbing, and would sleep for hours during the holidays to “recoup” from late nights and early mornings studying and finishing a multitude of assignments (language degrees tend to be pretty heavily weighted in the coursework department!)

Of course, you don’t get as many weeks’ holiday to rest once you move into the world of work, and adding in a commute meant that my mid-twenties taught me a lot about my limits as a Spoonie and that sometimes you just have to make sacrifices. By the time we started trying for a baby I thought I knew my limits and how to honour them. How wrong I was!

The past 5 years have been filled with events and experiences that have pushed me beyond my limits in a way I could never have imagined. Hyperemesis during pregnancy (with anaemia, Obstetric Cholestasis, and an unstable pelvis to boot) meant that I started my life as a parent physically beaten and emotionally exhausted. Sleep deprivation, which continued for years with our Little Man, who still at almost 5 years of age only sleeps around 9-10 hours a night and wakes regularly in the night too, affected my ability to rest and recover.

Returning to work, to help make ends meet and pay off our debt, meant that I had less time than ever before and suddenly had to split myself between work and home life. This became increasingly difficult when I moved into a homeworking role, one where my passion for the cause blinded me to the dangers of being “on the front line”, meeting people’s needs when those needs were intrinsically linked to my own personal trauma. And on top of all that, my husband was diagnosed with Small Fibre Neuropathy, meaning he lives in immense daily pain and, as he struggles to come to terms with his diagnosis, his emotional and mental health has taken a real beating.

So, as you can imagine, by the time we reached the end of 2014 I was completely and utterly spent. I remember crying as I walked the long route to nursery to collect Little Man, because I didn’t know how I was going to take another step. I remember being so terrified that I was losing my mind when I became obsessed with what was happening at work and I couldn’t eat or sleep as the anxiety made me so ill. And I remember praying for an answer, knowing that I had given it my all (and more) and I just could not go on any longer…

Of course, I was made redundant at the beginning of 2015, and things began to pick up. I felt well again, I had energy, I was sleeping and cooking and eating and enjoying life. Heck, when we finally moved back to my hometown I started two new jobs, working far more hours than I had initially contracted for, and spent almost every weekend busily attending conferences, visiting family, and having a great time. I thought that was it, that I’d survived the burnout of the past few years, and things were finally on the up!

Except, now I know better. That initial sense of relief that came with making positive changes in my life, was short-lived. No Spoonie can run themselves dry, borrowing not only days’ but weeks’, months’, even years’ worth of spoons without repaying it at some point. And yet still I tried to ignore it. The latter part of 2015 was overshadowed by three-day migraines, daily nausea, awful cramps, all of which I assumed were symptoms related to my Endometriosis. I ended the year with surgery and new meds that had helped previously and I thought 2016 would be okay. But it wasn’t.

I began this year experiencing extreme fatigue that seemed to last for days, especially after a week at work when my shifts all fell on consecutive days. I also began to suffer from joint pain again, as my left hip kept trying to “pop out” without warning, day after day. So I saw the doctor, thinking it was my Hypermobility. Except this time the word “autoimmune disorder” was mentioned and I was referred to a Rheumatologist. Since then I have had another GP, a consultant, and a physiotherapist all mention various autoimmune disorders to me, and I am awaiting screening for Lupus as various things in my blood report suggest it as a possibility. And I finally have to accept that after all I’ve been through, all my body has endured, this is perhaps inevitable – if you don’t respect the spoons you have, things are gonna get worse!

And I look back over the past few years and wonder why I was so determined to ignore that. It’s not that I didn’t know it, because I’ve always known it. My mum was diagnosed with ME when I was in my teens, so I have known about autoimmune disorders for most of my life. I also knew that there is often a crossover of these conditions, where someone like me with Endometriosis (for example) could have a higher risk of developing an autoimmune disorder. It’s one of the reasons why I finally decided I could never have another baby – my body did not recover as well as many of the other Hyperemesis mums seemed to, and I’d watched a dear friend go on to be diagnosed with Lupus following her own Hyperemesis pregnancy. I just didn’t want to risk that. No, I knew about the risk, I just chose to ignore it.

Perhaps that is unfair. The reality is that I had very little choice – my baby needed caring for, my husband needed support in coming to terms with his diagnosis, and the debt needed paying off. Whilst in hindsight I may have made different decisions (for instance, we paid off our debt much quicker with me in a part-time role than we did when I was working full-time!) I can’t go back and change it now. All I can do is learn from it and move forwards.

The reality of life as a spoonie is really clear to me right now. I am so sick that I do not have good days, not really. A good day to me is one in which I can get out of bed, eat without feeling too sick, play with my child a little bit, and maybe put a load of laundry in so that we have some clean clothes. On days like that I have to remind myself to limit what I do, that whilst my house is a mess and I’d love to take my son to the park and enjoy the sun, if I do so I will regret it tomorrow. Because my bad days are really bad. On a bad day I can barely move – I just do not have any energy – and I run a fever, feel dizzy and sick, and struggle to even concentrate on the smallest of tasks like reading a book or sending an email. And I want to avoid those bad days as much as I can.

I know there is no quick fix to this. I know that I ran on borrowed energy for far too long, and that I have to repay that debt with exactly the same amount of care and patience as we paid off our financial ones. But it is hard, so hard! There are days when I feel like a terrible mother, because all Little Man hears all day is, “I’m sorry, mummy feels too poorly to do that.” There are days when I feel like a terrible wife, because TJ is also struggling and I simply cannot do anything to help him out any more, I have to look after myself first. And there are days when I feel like the world’s worst friend, because I’ve not been in touch with anyone for weeks (not even on Facebook) and my mum has to call me to tell me a friend has announced her much wanted pregnancy so I don’t miss it entirely. But that’s the reality of life as a Spoonie, especially when you’ve run out of spoons.

I’m hopeful that as and when I embrace this life of a Spoonie, really accept that this is how things must be and that the sacrifices I make are for a better future, that things will get better. I know many people who have been where I am and have then gone on to manage their condition better over time. I know it is possible to come back from this, and that is what is keeping me going right now. But the only way to do that is to listen to my body, honour its desperate need for rest, and do whatever it takes to begin to heal. I mentioned to someone recently that I know if I am ever to heal, I need to make BIG change in my life. And that’s the reality of life as a Spoonie.

Tell me, if you’re a Spoonie, what does life as a Spoonie look like for you?

Our Consultation with the Neurologist

The Magic of Trees - Holly