Top Ten YouTube Channels (as chosen by our 3 year old) 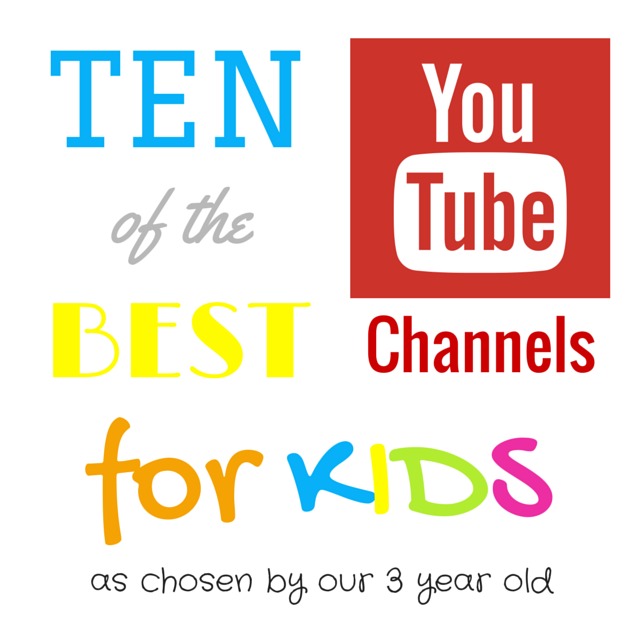 In 2013 we decided to cancel our cable subscription and TV licence, as we found we just weren’t really watching live TV any more and most of what we watched was on demand or via alternative means (such as our favourite series on DVD).

It took a little bit of adjusting to, but we’ve found some great benefits to this, including being more intentional about what we watch and finding some fantastic new sources of entertainment. One of those has to be YouTube channels.

We’ve talked about one of those already, when we shared our love of Cosmic Kids with you. However our saved channels list grows every month and, as many of those are for Little Man to watch, I thought it might be helpful to share some of his favourites with you in case your own children fancy watching some videos online.

Little Man is a dab hand at using YouTube on the tab, and has made his way to all sorts of kids’ programmes with very little input from us. We obviously watch what he is choosing and make sure it is appropriate (you particularly have to keep an eye on the adverts at times), but we love the freedom he has to choose videos he is interested in. Perhaps this would not be the case if he wasn’t so obsessed with educational videos (!!) but as his favourites include shapes, numbers, and the alphabet, I’m not going to complain.

So, without further ado, here are ten of Little Man’s favourite YouTube channels…

KidsTV 123 was one of the first dedicated kids’ channels we found. There is an absolute wealth of videos on the channel, covering a wide range of topics such as numbers, letters, shapes, measurements, space, the world, and so much more. The songs are simple and easy to sing along to (although be warned that they do tend to get stuck in your head for days on end).

Every time I hear the music for TuTiTu I am thrown back in time to last summer when it was Little Man’s absolute favourite thing to watch – that music seemed to haunt me even in my sleep! And yet, despite the fact the music was irritating at the time, I was outraged when they updated it slightly this year. I guess my feelings for TuTiTu are deeper than I realised… I think it has that kind of effect – go check it out.

Have Fun Teaching has to be one of my absolute favourite YouTube channels for kids. The music is far from the plinky-plonky stuff that seems to drown out most things aimed at young children. The content of the videos seems to be aimed at slightly older children, to be fair, but Little Man loves them and hearing him rap along with the Shape Song is just too adorable for words…

StoryBots is a relatively new discovery of ours, but it has become a firm favourite for all of us. Their alphabet songs are amazingly cool, and TJ and I find ourselves singing them at random points in the day. TJ’s favourite it the X song, so I’ll share that one here, but the whole alphabet is well worth a watch!

I have to admit, I have a love/hate relationship with The Kids Picture Show. The videos are really quite extensive and Little Man loves them, but since he has started watching them he enjoys trying to pronounce words in the way they are spoken on the video, which leads to him dropping the “t” in words like “letter”. That being said, he now recognises many more fruit and vegetables and is obsessed with asking what kind of train we’ve just spotted going past on the tracks or the exact type of vehicles that pass us by on our way home from nursery. For a boy who wants to know everything, this channel is a dream come true.

ABC Kid TV is one of those channels with songs which can easily drive the parents nuts, but they do have lovely long videos which can keep the kids entertained while you cook dinner! Little Man loves the letter and shape collections.

Little Baby Bum has an extensive collection of nursery rhymes and action songs that Little Man loves joining in with. They also have karaoke versions of the songs, which is pretty darn cool, don’t you think?

Kids TV has a series with Bob, The Train, who Little Man really loves to watch. I mean, what’s not to love – he’s a train, he learns about letters and shapes and numbers, he’s just so cool!

Oh My Genius has a series of videos that are very similar to TuTiTu, with a character known as Uchi Uchi who flies around and drops little bits and pieces which add up to create everyday items we know. Despite finding it after TuTiTu, Little Man once told me that he preferred Uchi Uchi to TuTiTu… I felt like this was a little bit of a betrayal to poor TuTiTu, our first love, but I think that’s just me!

I couldn’t end this list without including at least one of the foreign language channels Little Man enjoys. To be honest, he actually watches an awful lot of Russian language videos and I probably should have included one of those channels instead. However, I think that this channel is much more accessible and helpful for those who, like us, are trying to introduce a foreign language into everyday family life.

Sing Mit Mir have a lovely selection of German kids songs, all beautifully illustrated. Each one has the lyrics included so that you can sing along, and ultimately learn them so that you can sing them at any time. Our favourite is alle meine Entchen, which we sing as we pass the ducks on the way home from nursery.

If you have enjoyed this post and found it useful, here are some ways you can say thanks and support A Spiral Dance.

How To Teach Children To Be Kind